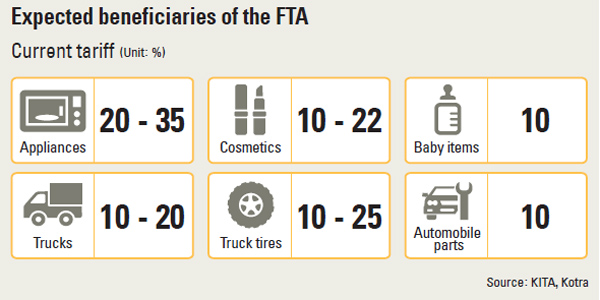 According to the Ministry of Trade, Industry and Energy on Thursday, under the Korea-Vietnam FTA concluded at the Asean-Republic of Korea Commemorative Summit in Busan the previous day, Korea will open 94.7 percent of its import market to Vietnam, while the Southeast Asian nation will open 92.2 percent.

“In the short term, Korea will open its market first to Vietnam, but in the long term, the FTA will help Korean businesses secure the Vietnamese consumption market,” said an official at the Trade Ministry. 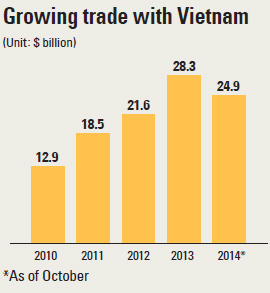 For Korean exporters, Vietnam, with a population of about 90 million, will become a new target for global expansion.

Vietnam will lift tariffs currently set at 20 to 35 percent on home appliances made by Korean companies within 10 years, which will give the products a strong competitive edge in the market. Due to the popularity of K-pop and drama stars, home appliances such as TVs, refrigerators, air conditioners and rice cookers are popular among Vietnamese consumers. They are also big fans of Korean cosmetics because they want to emulate the style of Korean singers and actresses.

Tariffs of 10 to 20 percent on automobile parts will also be removed over a 15-year period, allowing Korean auto part makers to export more to the country, which is home to production lines of global automakers. Some cargo trucks and cars will also be subject to tariff cuts.

Tariffs on tires, textiles and train parts will also be eliminated gradually, which will make Korean manufacturers more competitive with Japanese rivals. Japan reached an FTA with Vietnam in 2009, but maintains tariffs on these products.

Korean consumers will be able to get clothing from foreign brands and tropical fruits at lower prices.

When the FTA comes into force, about 20 types of apparel including socks, shirts, blouses, jackets and coats made in Vietnam will be imported to Korea tariff-free. Currently, a 13 percent import tax is imposed on those products. Clothes are Vietnam’s second biggest selling product in Korea. It is likely that prices of foreign apparel brands with factories in Vietnam, such as Northface and Uniqlo, will go down.

The Korea-Vietnam FTA is more broad than the recent agreement made with China in terms of opening agricultural and fisheries trade. Korea will lift tariffs on Vietnamese crops and fishery products in three to five years. Import taxes on fruit like pineapples and mangoes will be removed in 10 years. Rice, squid, cutlassfish and mackerel, which are very popular in Korea, will keep their tariffs.

According to the Korea Trade-Investment Promotion Agency on Thursday, the trade volume between Korea and Vietnam has grown more than 40 times since the two governments formed diplomatic ties in 1992. Vietnam is Korea’s sixth-largest export market and 15th-largest importing country.

Korea has been exporting chips, mobile device parts, synthetic resins, plastics and commercial vehicles while importing clothes, shoes and wood from the country.

“Vietnam, which has a relatively young population and strong brand loyalty, will be a profitable consumer goods market for Korean companies,” the agency said.