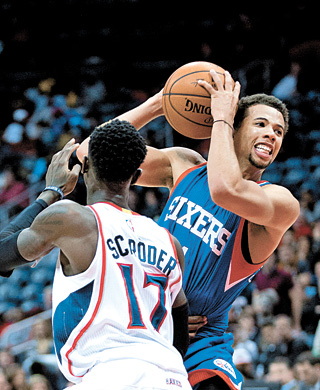 Philadelphia 76ers guard Michael Carter-Williams struggles to get past Atlanta Hawks guard Dennis Schroder in the second half on Wednesday, local time, in Atlanta. [AP/NEWSIS]

The Atlanta Hawks weren’t going to let an ugly shooting night - or the last-place Philadelphia 76ers - mess up their winning streak.

Kyle Korver and Paul Millsap each scored 17 points and Atlanta beat the 76ers 95-79 on Wednesday night, giving the Hawks their longest winning streak in 17 years.

DeMarre Carroll had 14 points and 11 rebounds for Atlanta, which shot only 41.8 percent from the field. The Hawks finally stretched the lead in the final period.

Philadelphia Coach Brett Brown held out forward Brandon Davies. Brown said he could not confirm Davies is about to be traded, but he indicated a trade could be coming.

“I was aware his name was a part of it and I spoke to him before the game and told him that and said that I wasn’t going to be able to play him tonight and risk things that were moving,’’ said Brown. “I felt out of fairness to him, he needed to know why he’s not in the game.’’

Davies, in his second season, is averaging 6.3 points and 3.6 rebounds. He has started six of 20 games.

The Hawks averaged 104 points in their first seven wins of the streak, but they had to rely on defense against Philadelphia.

“It was kind of ugly, not the best basketball game for us,’’ said Hawks Coach Mike Budenholzer. “We were good enough to get the win, but we’ve got to get better.’’

“Tonight, I think we were a little stagnant,’’ said Philadelphia’s Michael Carter-Williams, who had eight points, 10 rebounds and a game-high nine turnovers. “We didn’t get into our sets quick enough, and of course our turnovers killed us.’’

Strong defense helped overcome a sluggish game for Atlanta’s offense. The Hawks never trailed and led 47-38 at halftime and 68-58 entering the final period.