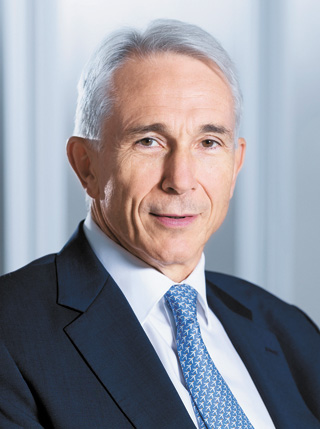 The IATA, based in Geneva, represents about 250 airlines that account for 84 percent of global air traffic. Korea’s two flag carriers, Korean Air Lines and Asiana Airlines, are both members.

Tyler, who has led the industry group since July 2011, said that he had heard about the dramatic scene caused by first daughter of Hanjin Group Chairman Cho Yang-ho, which made international headlines this week.

“Nowadays, these things get a lot of coverage in media and it seems it’s over now,” Tyler, who has more than three decades of experience in the airline industry, told the Korea JoongAng Daily on Wednesday. “But you know, these things happen.”

Cho, who is known as Heather Cho, forced a plane on which she was a passenger to return to the gate at JFK International Airport over the weekend in order to kick off the crew’s manager because a flight attendant had served her nuts without a dish. She resigned over the scandal on Wednesday.

When asked whether he thinks Cho had made a decision that should have been left to the captain or violated the law, Tyler said that he would wait for the results of the Korean authorities’ investigation.

However, the former CEO of Cathay Pacific Airways said that misbehaving passengers are a growing concern for airlines as they have been causing an increasing number of flight disruptions. The 59-year-old Briton welcomed the UN’s International Civil Aviation Organization’s intention to deal with unruly passengers in the Montreal Protocol 2014. The new protocol clarifies what counts as unruly behavior by passengers and also expands the jurisdiction of any offense to include the destination country of the flight.

As for the Korean government’s choice to suspend Asiana Airlines’ San Francisco flights for 45 days following the fatal landing accident last year, Tyler insisted that it’s not the best approach since the purpose of the investigation should be to prevent future accidents.

“If that’s a law, it’s a misguided law,” he said of the suspension. “It should be changed.”

Before the government announced its penalty for Asiana, the IATA sent a letter to the Korean Transport Ministry bearing Tyler’s name asking the ministry to see that the punishment would not help improve safety. In response, KAL CEO and Chairman Cho criticized the IATA’s action, saying it was interfering in domestic affairs and that Asiana should be given the maximum penalty. Cho is a board member of the IATA.

Despite their differences, Tyler said that his relationship with Cho is fine and that no problems have emerged between the two from the Asiana penalty issue.

“I just met Mr. Cho last week, and we understand each other’s position,” Tyler said. “We discussed it and we agreed that some laws are fundamentally unsound.”

Regarding complaints from Korean air carriers and other airlines over flying in North Korean skies and the cost of avoiding the area, Tyler said that IATA has discussed airspace use with the North Korean government. But he said the issue between South Korean airlines flying over North Korea should be decided between the two nations.

“There’s not really anything the IATA can do regarding the issue between South Korea and North Korea on opening skies, but of course we would like to see all air space made available to everybody,” he said.