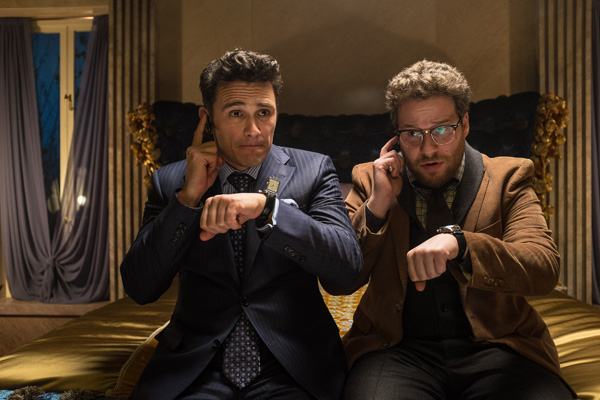 This image released by Columbia Pictures shows James Franco, left, and Seth Rogen in “The Interview.” The comedy is set for release in 2014 on Christmas Day in the United States. It will not be released in Korea. [AP/NEWSIS]

LOS ANGELES - Sony Pictures Entertainment plans to roll out the red carpet for the Thursday (local time) premiere of “The Interview,” but the stars of the controversial comedy about North Korea will not face the customary glare of TV news cameras.

The studio said Wednesday only still photographers and a Sony video team will document arrivals at the event, stopping reporters from asking Seth Rogen and James Franco about a massive cyberattack at Sony that some speculate is linked to the film.

People close to the investigation have told Reuters that North Korea is a principal suspect, but a North Korean diplomat has denied that his nation is involved. Pyongyang condemned the film in June.

In the movie that opens Dec. 25, Franco and Rogen play journalists who land an interview with North Korean leader Kim Jong Un, then are recruited by the CIA to assassinate him.

A spokeswoman for Sony, a unit of Japan’s Sony Corp., could not immediately be reached for comment on why press access to the premiere was limited.

The studio also cancelled a Los Angeles press day that had been planned for this week and said a press day in New York next week may not take place.

The cyberattack launched on Nov. 24 shut down Sony’s computer network and exposed company secrets. Among them were emails that revealed Sony Chief Executive Kazuo Hirai ordered “The Interview” be toned down after North Korea complained.

Hirai ordered the film “The Interview” to be changed after Pyongyang denounced it for depicting the assassination of North Korea’s leader, according to the emails apparently stolen from Sony’s Hollywood studio.

In the emails, which span from August through October and were obtained by Reuters, Hirai asked Amy Pascal, co-chairman of Sony Pictures Entertainment, to change a key shot in the film. It depicts Kim struck by a tank shell, causing his head to explode.

Pascal noted to Hirai that she had encountered resistance from the film’s creators, including Rogen, who wrote and co-directed it.

Hirai’s interest in the film shows the company’s leadership was worried about Pyongyang’s objections, even before a devastating cyberattack on Sony’s Hollywood studio network last month that crippled most of it for more than a week.

North Korea complained to the United Nations in July, accusing the United States of sponsoring terrorism and committing an act of war by allowing production of the movie.

In an exchange with Rogen, Pascal said she was in a difficult position because Hirai had asked her to make changes in the film.

“And this isn’t some flunky. It’s the chairman of the entire Sony Corporation who I am dealing [with],” she said.

Rogen responded by promising to remove three of four burn marks on Kim’s face, and reduce the “flaming hair” by 50 percent. But he said he could not meet all the demands.

“The head explosion can’t be more obscured than it is because we honestly feel that if it’s any more obscured, you won’t be able to tell it’s exploding and the joke won’t work,” he said.

Details of the emails were reported late on Tuesday by Bloomberg News.

More than 100 gigabytes of information purportedly stolen from Sony have been released on the Internet, according to cybersecurity experts, who say the documents appear to be authentic.

Rogen initially told Pascal he objected to requests to modify the death scene, which he said would be viewed as censorship and hurt sales.

“This is now a story of Americans changing their movie to make North Koreans happy,” he said in an Aug. 15 email. “That is a very damning story.”

By October, however, he delivered what he hoped was the final version.

“This is it!!! We removed the fire from the hair and the entire secondary wave of head chunks,” he said. “Please tell us this is over now.”