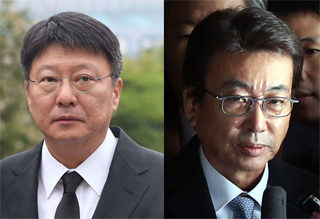 The rumored power struggle between a shadowy former aide to President Park Geun-hye and the younger brother of the president has emerged as a complicating factor in the prosecution’s investigation into a complex and expanding political scandal involving key Blue House secretaries.

Chung Yoon-hoi, who served as Park’s chief of staff from 1998 until 2004, was questioned by prosecutors Wednesday following accusations that he acted as a power broker in a back-room string-pulling scandal at the Blue House.

During questioning, he told prosecutors that he wished to confront Park Ji-man, the president’s brother, over a series of accusations leveled against him, a source at the prosecution told the JoongAng Ilbo.

According to the source, Chung demanded that he be questioned in the presence of Park Ji-man over reports that Chung had hired someone to track Park’s movements. The allegation was detailed in a March article by the Sisa Journal, a weekly magazine.

“The allegation was amplified after Park claimed that he had a statement from the person I hired to follow him,” the source quoted Chung as saying. “I want to confront Park and put an end to this.”

Chung is also willing to confront the alleged tracker, the source added.

In addition, the former aide complained that he had filed a petition in July calling for the investigation of reporters at the Sisa Journal on libel charges, but that little progress had been made in the probe because Park Ji-man refused to cooperate.

The prosecution is currently mulling the possibility of summoning Park Ji-man next week, but it remains to be seen if he will comply. “He will not accept Chung’s request to be cross-examined,” an aide to the president’s brother told the JoongAng Ilbo.

Another aide to Park stated that the president’s brother was neither a petitioner nor a suspect in the probe, adding that if the prosecution asked for his cooperation, he could always send written statements.

In an earlier interview with the JoongAng Ilbo, a confidant to Park Ji-man said last week that Park would be forced to take action if Chung continued to lie during the investigation.

Chung was sent home late Wednesday after the Seoul Central District Prosecutors’ Office questioned him for more than 15 hours about the scandal.

Quoting a leaked Blue House document authored by the Office of the Presidential Secretary for Civil Service Discipline, the Segye Ilbo reported on Nov. 28 that Chung had routinely met with the president’s key secretaries and influenced political affairs behind the scenes.

Chung was questioned Wednesday about the allegation that he had consistently met with presidential secretaries Lee Jae-man, Jeong Ho-seong and Ahn Bong-geun two times a month since October 2013 in order to have leverage in state affairs.

After the scandal broke, rumors circulated that a power struggle between Chung and Park Ji-man had caused the leak. Chung formerly oversaw all three Blue House secretaries during President Park’s years as a lawmaker, while Park Ji-man had connections to the Office of the Presidential Secretary for Civil Service Discipline, which drafted the leaked report.

Cho Eun-cheon, a former secretary in the office, is Park Ji-man’s associate as well as the superior to Park Gwan-cheon, police chief superintendent and the author of the leaked Blue House document. Prosecutors allowed a meeting between Chung and Park Gwan-cheon to verify Chung’s earlier claim that Park Gwan-cheon had written up the document on the orders of his boss.

“I only typed up what was ordered from the upper authority,” Chung quoted Park Gwan-cheon as saying.

The prosecution said it plans to go after more people to track down the source of the rumor that stated that Chung had operated secret gatherings with Blue House officials.

Park Gwan-cheon claimed his informant was Park Dong-yeol, who formerly headed the Daejeon branch of the National Tax Service. The former tax official told prosecutors that he heard about the allegations surrounding Chung’s meeting from other people.

The prosecution raided Park Dong-yeol’s home on Wednesday and said the people he identifies as his sources will be summoned later.

After questioning Chung and analyzing records from his mobile phone, prosecutors have tentatively concluded that the alleged meetings between Chung and the three Blue House secretaries did not take place based on how they were stated in the leaked report.