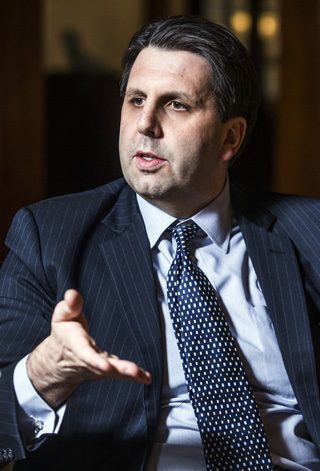 New U.S. Ambassador to Seoul Mark Lippert said that Washington’s policy on North Korean denuclearization is anything but one of “strategic patience.”

“Nobody in the U.S. government is calling [its policy on North Korea] strategic patience,” said Lippert as he sat down with JoongAng Ilbo senior columnist Kim Young-hie on Wednesday at Habib House, the ambassador’s residence in central Seoul, in his first interview with the Korean media since he took the post in October.

“Because there is actually quite a lot of activity going on behind the scenes. You don’t read about it in the newspapers, you don’t always see it on TV, but this is something that is extremely important to policymakers in Washington.”

The 41-year-old diplomat, the youngest ambassador Washington has ever dispatched to Seoul, replaced predecessor Sung Kim. Strategic patience is a common nickname for the Obama administration’s policy about North Korea. 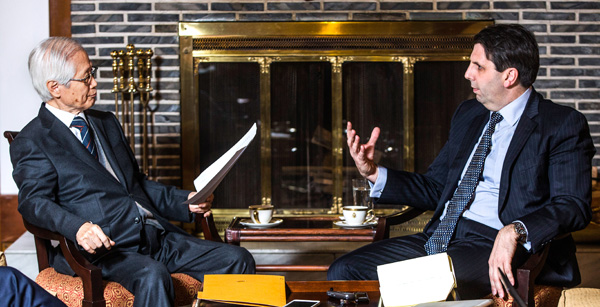 U.S. Ambassador to Seoul Mark Lippert, right, talks with JoongAng Ilbo senior columnist Kim Young-hie on Wednesday at Habib House, the ambassador’s residence in central Seoul, in his first interview with the Korean media since he took the post in October. By Kim Seong-ryong

“This administration, as with the case of Iran and with the case of Burma [Myanmar], has shown a willingness to engage when there are authentic and credible negotiations,” Lippert said. “We just have not seen that in terms of a serious opportunity to effectuate that type of negotiations that will lead to complete, verifiable, irreversible denuclearization on the Peninsula.”

Lippert, a Navy veteran who previously served as chief of staff to U.S. Secretary of Defense Chuck Hagel, added that it is “an important goal and a policy objective of the administration” to respond to the “serious threat” of Pyongyang’s nuclear and missile programs.

After arriving on Oct. 30, Lippert has been actively reaching out to Koreans via Twitter, a blog titled “The Lipperts in Korea” and casual appearances in public with his wife, Robyn, and floppy-eared basset hound, Grigsby.

Lippert discussed a range of issues including a baby on the way and even his penchant for kimchi.

Q. Is Washington serious in its efforts to solve the North Korea issue?

A. There’s no doubt that this is a big and important foreign policy agenda item in Washington as well as here in the region. And we do have a very clear and active policy... First, there is the political piece of this policy, and we have reached out over the course of six years to the North Koreans. They have shown no interest in talking... But in the absence of that we have done a couple of things. One, we have continued to closely coordinate with folks in the region; there’s virtually no daylight between us and the Republic of Korea government. We have very good conversations in Beijing and Tokyo as well. And we work very hard on the multilateral front...

On the economic side, it’s precisely why we worked hard on the sanctions regime, to increase the cost of a nuclear and missile program and also to increase the cost of potential proliferation. Finally on the military side, or defense side, we are worried about the threat... That’s precisely why you have seen us upgrade capabilities here on the Peninsula, working with close partners in the Republic of Korea.

Q. It is widely accepted that North Korea will never give up its nuclear weapons programs. In that case, what is your policy option?

A. You need to start down a path that starts with credible and authentic negotiations. When there is a willingness by the North to enter into such negations, this administration has shown a track record of standing ready, and moreover trying to work on creative diplomatic solutions, as we did in the opening of Burma... to bring about important change that people said would never happen.

A. On Thaad, we are not in any kind of formal conversations. I’ve made the rounds here in Seoul with government officials and the issue has not come up once... If there is ever a chance we have more to say, we will quickly report out.

Q. Do you think Washington has done its utmost to let its allies Korea and Japan reconcile?

A. We recognize that these are very, very tough historical issues between Seoul and Tokyo. The United States is not playing a mediating role, but obviously we are working behind the scenes to encourage a better relationship where we can.

Q. What do you say to skepticism about the substance of President Obama’s pivot to Asia?

A. The rebalance is very much in full swing... The three main pillars are diplomatic, economic and defense. On the diplomatic side, the president completed a very successful trip out here in the region. He’ll be back to India early next year.

On the economic side, we have the success story of the [Korea-U.S.] FTA, which boosted exports on both sides by about 10 percent or so. And then the Trans-Pacific Partnership is down to kind of the endgame. On the military side, what you are seeing is more U.S. assets out in the Western Pacific and Pacific. The Navy is committed to bringing 60 percent of its fleet by 2020.

Q. How close are you to President Obama? Can you pick up the phone and talk with him any time you want?

A. The president and I, we go back a ways. We’ve known each other for many years now, traveled in many countries together. I’ve been to his home in Chicago. We are good friends. And he’s a warm and generous man, as is the rest of the family. But you know, in terms of picking up the phone and calling the president, there is a time-honored tradition of keeping your counsel between you and the president, and I’ll obviously honor that.

Q. When President Obama named one of his closest friends as ambassador to Korea, he might have had a special mission in mind for the ambassador to accomplish. What could that be?

A. This relationship has been a critical part of his body of work as president. You look down the line at the [Korea-U.S.] FTA, on some of the defense modernization we’ve done together, and all the global problems we’re working on together... So what I would say is that if there is a special mission, it’s to build on the momentum.

Q. You are a unique diplomat, reaching out to Koreans with tweets and meeting Koreans on the streets.

A. This is who we are. This is who my wife and I are. We are people who enjoy getting out, meeting people, making friends... Koreans have a special place in our hearts. We enjoy the warmth, we enjoy the hospitality.

Q. You will be the first U.S. ambassador with a baby due early next year. How excited are you?

A. Extremely excited and extremely nervous. We do not know if it’s a boy or girl yet. We’ve kept that a surprise.

Q. Do you eat kimchi?

A. I eat a lot of kimchi. Absolutely. I love it. I love the flavor.