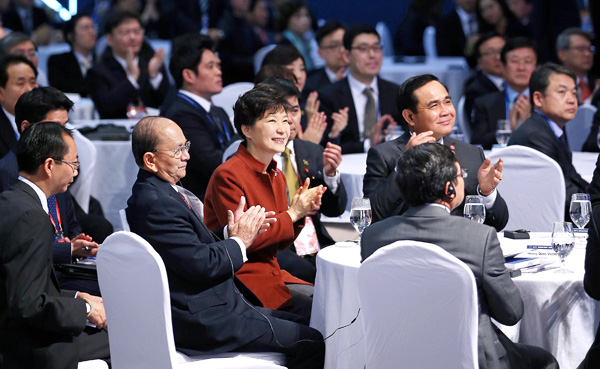 In a keynote speech Thursday at the 2014 Asean-Republic of Korea Commemorative Summit in Busan, Park said, “In line with economic development so far and their proportion in the global economy, Korea and Asean should take further steps to promote bilateral economic cooperation.”

She spoke to 400 government officials and businessmen participating in a CEO summit with the theme “Innovation and Dynamism: A New Takeoff in Asean-South Korea Relations.” It was the first official event for the two-day Asean-Republic of Korea Commemorative Summit, the first multilateral meeting hosted by Korea since the inauguration of Park’s administration.

Korea has concluded FTAs with Asean, the United States, China and so many countries that its FTA partners now comprise 74 percent of global gross domestic product. But the utilization rate of the Korea-Asean FTA among Korean businesses is roughly half the level seen with other FTAs, the president noted.

She said Korea and Asean members’ governments should begin additional negotiations without delay.

Asean was the second-largest trading partner worldwide for Korea, with trade volume at $135.3 billion, just trailing China last year. Korea aims to expand that volume to $150 billion by 2015 and $200 billion by 2020.

Korea wants to revise a rule that it believes has blocked active implementation of the Korea-Asean FTA, which took effect in 2009. The rule regards the principle of reciprocity. If one country exports a sensitive-track product that maintains either a non-scheduled or high-duty rate, the importing partner must also apply the same rate, even if the product in question may be subject to tariff elimination. Negotiations with Brunei, Laos, Malaysia, Myanmar, Singapore and Vietnam to work on that rule are set to take place throughout the summit.

Park also reiterated the need for Korea and Asean members to join forces to facilitate the access of small and medium-sized enterprises to global value chains (GVCs), a proposal she made at the Asia-Pacific Economic Cooperation summit in Beijing in November. In development jargon, GVCs refer to the full range of industry and trade operations between the conception of a product and its final sale, which are dominated by conglomerates.

She took the examples of Hallyu, or the Korean Wave of popular culture exports, and Southeast Asian dishes popular here such as pad thai and mie goreng, types of noodles.

Park had bilateral summits with leaders from six countries - Myanmar, Indonesia, Laos, Thailand, the Philippines and Singapore - throughout the day in which she vowed to boost economic cooperative measures in free trade and infrastructure projects and diplomatic partnerships.

Park also offered condolences to newly elected Indonesian President Joko Widodo after 35 Indonesian crew members went missing from a Korean fishing vessel that sank in the Bering Sea off the coast of Russia on Dec. 1. When sitting down with President Benigno S. Aquino III of the Philippines, she promised to offer $1 million aid after the country was slammed by the deadly Typhoon Hagupit.

Later in the evening, the first ladies of participating nations joined an event hosted by Korea to demonstrate traditional Korean culture. On display were crafts such as white porcelain, patchwork cloths, portable dining tables and wooden molds for tea confectionaries. Artisans of each craft were seen making them.

The event was followed by a banquet featuring a menu that combined hansik, or Korean cuisine, and Western cuisine, as well as dance performances and a gig by Psy.