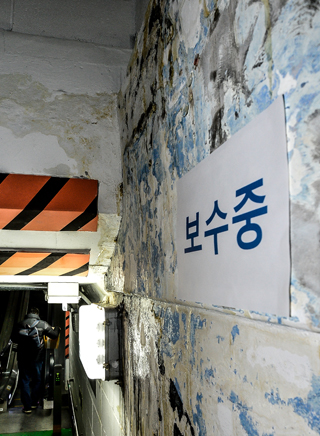 Water leaks in the basement parking lot of Lotte World Mall on Thursday. But despite repair work, which started on Nov. 22, issues remain. [NEWS1]

The Seoul Metropolitan Government announced on Thursday that it has begun scrutinizing the safety of the Lotte World Aquarium, following an administrative order from the newly established Ministry of Public Safety and Security.

Concerns arose after a seven-centimeter (2.7 inch) crack was discovered Saturday in the 11,000-square-meter (118,000-square-foot) aquarium.

The results of the safety assessment could lead to a business suspension based on the degree of problems found. Currently, the use of the aquarium tunnel is limited, Kim said.

Before the safety evaluation was announced, the ministry launched a safety inspection team consisting of 11 safety experts, which carried out its investigation Wednesday.

The ministry announced that the team had tentatively concluded that the fissure was caused because the adhesive sealant failed to properly bond the aquarium to the concrete wall.

The inspection team also spotted two other cracks during the investigation and said the cause would be determined in the safety inspection.

“We suspected that the other aquariums might also have leaks in addition to the other one,” said Kim Chan-oh, who led the inspection team. “So we concluded that a safety evaluation was required for further investigation.”

Lotte apologized in a statement issued Thursday. “We understand that safety is the No. 1 issue,” it said. “We will do our best to fix the safety problems that the inspection team has pointed out.”

The Seoul Metropolitan Government also asked the mall on Nov. 6 to make repairs after water was found leaking in the basement parking lot, which is connected to the Jamsil Station.