KAL’s Cho admits she was ‘bad’ in nut tirade

KAL’s Cho admits she was ‘bad’ in nut tirade 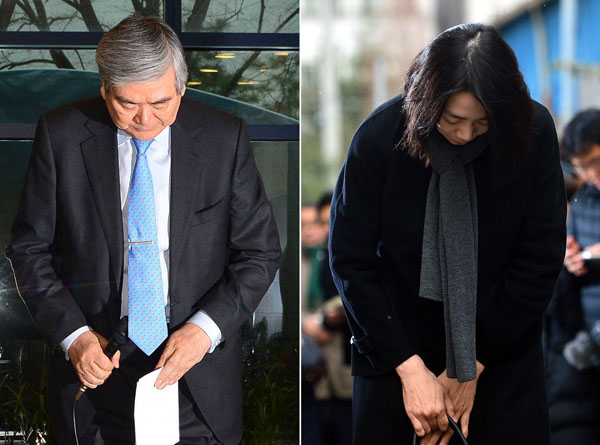 Cho Hyun-ah, the former vice president of Korean Air who delayed a flight over the way macadamia nuts were served in first class, said she is willing to directly apologize to the cabin manager she ejected from the airplane, who had to wait 12 hours for the next flight from New York’s JFK Airport back to Korea.

The 40-year-old daughter of the Chairman and CEO of Hanjin Group, which owns Korean Air Lines Co. (KAL), appeared at Gimpo International Airport at 2:57 p.m. for questioning by the Ministry of Land, Infrastructure and Transportation over the incident, in which Cho ordered the plane back to a JFK gate to eject the cabin manager. The questioning was held at the aviation security supervision office in the airport.

Wearing a black suit and overcoat, Cho got out of a black Grandeur sedan and said, “I’m sorry, I really was bad” twice and bowed in front of reporters and photographers. “I will cooperate with the ministry’s questioning and will apologize to the cabin crew manager in person,” she said.

The questioning was organized by the Transport Ministry, which wants to find out if Cho violated international aviation security law. The ministry said it needs to find out if Cho ejected the cabin manager on her own or whether she discussed it with the captain of the plane. Under the country’s aviation law, the authority to manage all airplane crew members rest with the captain. Details of the questioning didn’t come out by press time.

Cho is also under investigation by the Western District Prosecutors’ Office, which raided Korean Air on Thursday after receiving a complaint from a civic group that asked whether Cho’s orders to the crew violated their human rights or aviation security law. Following the raid, prosecutors banned Cho from leaving the country.

Cho Yang-ho, Cho’s father and Chairman and CEO of Hanjin Group, offered an apology to the nation over his daughter’s behavior in New York.

At 1:30 p.m. at the company’s headquarters on Gonghang-dong, western Seoul, Cho said in a press conference with about 200 reporters, “I sincerely apologize to the nation for my daughter, who came under fire for inappropriate behavior.

“As the CEO of Korean Air and the father of Hyun-ah, I ask you to forgive us,” he said. “It is entirely my fault that I raised my child wrong and I promise that I will make her step down from all of her posts in the company and its affiliates.”

After the scandal broke and the Cho family became objects of scorn, the daughter gave up her title as a vice president of KAL but remains an executive of the group and heads the airline’s hotel business. The father said he hasn’t considered resigning as head of the 2018 Pyeongchang Winter Olympics Organizing Committee.