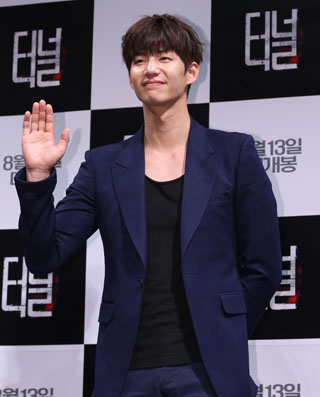 In the new drama series, which is tentatively entitled “Unkind Women,” the 29-year-old actor will play the role of Ru-oh, who is a kendo instructor.

He will develop a romantic relationship with his fictional love interest played actress Lee Ha-na.

The drama series, which depicts three generations of women living in the same family, will begin airing in February.

This is Song’s fist lead role since his debut in 2009.

He started out his career as a model, but soon made the transition from the runway to the television screen when he began acting in 2010.

The actor has appeared in drama series such as “The Idle Mermaid” this year and “Moon Embracing the Sun” in 2012, but he began to grab the attention of viewers with his candid personality in reality TV show “We Got Married.”

In the fourth season of the reality TV show, Song teams up with actress Kim So-eun and experiences what life would be like if they were married.

Of all the fictional couples appearing in the TV show, the Song-Kim couple earns the highest viewership, according to MBC.

As the popularity of the show soared, Song recently signed contracts to endorse different products, from clothing to fast food.