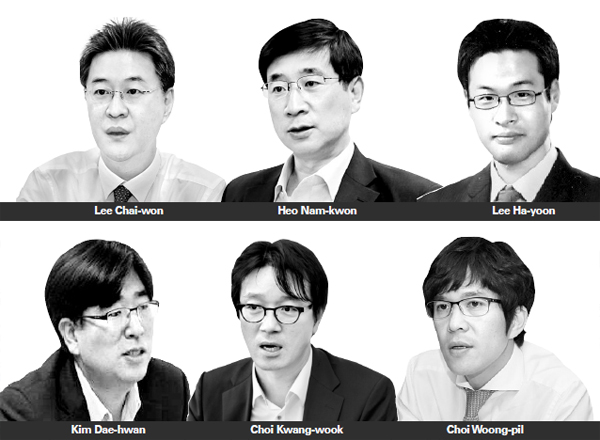 Among the top 10 fund managers in terms of the profitability, eight were value investors, according to a survey conducted by JoongAng Ilbo and the financial information provider FnGuide.

FnGuide analyzed the rate of return for Korea’s fund managers for three years as of Oct. 1. It surveyed 599 managers listed by the Korea Financial Investment Association.

The survey picked 30 fund managers who had higher profits than 16 percent, which included dividend yields and the growth rate on the Kospi over the past three years.

Value investment is a strategy of acquiring stocks that trade for less than their intrinsic value, as they are undervalued by the market but have potential for long-term growth.

First-generation value investors refer to people in the 1990s who introduced the system of identifying undervalued stocks for long-term investment.

The second generation has emerged since 2010.

At Shinyoung Securities, three second-generation value investors - No. 1 Park In-hee, No. 3 Kim Hwa-jin and No. 7 Kim Dae-hwan - were in in the top 10.

“Assets move by cycle, and the patience to invest over time is required,” said Heo. “In addition, if the investors have consistency, they can earn higher returns than others.”

Lee said he holds many investments for two to three years to even 10 years for a return.

That exceeded the holdings of largest shareholder Shin Kyuk-ho, chairman of Lotte Group.

Just a month after he purchased the shares, the price fell to nearly 70,000 won. However, it has rebounded continuously since then to trade at 1.5 million won per share today.

There is only one investing principle she has kept while managing Samsung’s small and medium funds for the past seven years: Invest for the long term in stocks that have the fundamentals for future growth.

“Like Warren Buffet, I consider the magic of compound interest very important,” said Min. “The longer the invest period, the higher return you can get.”

The most representative companies in her portfolio are Hanssem and Amore Pacific, in which she has invested since 2008.

The average rate of return at these three companies was 51 percent.

“The three-year profitability of value stocks, 18.7 percent, is higher than for rising stocks, which have an 11.6 percent of rate of return,” said Shin Kun-kook, who is in charge of evaluating funds at FnGuide.

“This is because as the Kospi was trapped in a box pattern, in which stocks corrected no more than 15 percent in either direction, for three years, the value stocks made more stable profits than rising stocks.”

“Value investment is a strategy that recognizes the difference generated between the price set by the irrationality of the market and the real value,” said Lee of Korea Investment Value Asset Management. “In other words, it buys at a cheap price and sells at a reasonable price.”

These days, second-generation value investors who have seven to eight years of asset management experience under the guidance of first-generation investors are making their way into the top ranks.

Park In-hee, who was trained by Heo Nam-kwon at Shinyoung Securities, is a case in point. She took the baton from Heo and has been managing Shinyoung’s most representative high dividend value funds.

This is the fund that benefited most from this year’s government policy of expanding dividends.

Thanks to its historically stable rate of return, about 1.5 trillion won in assets has flocked to this fund.

“It is not easy to find stocks that are cheap, but at the same time can yield sustainable dividends,” said Park.

“The effort to analyzing items that could yield sustainable dividends at cheap prices since the market was not interested in stocks with large dividends is finally paying off.”

She says she visits at least two to three companies a week.

“After I visit the companies, I decide whether to invest in them,” said Park. “When I look around the site and listen to the employees, I get confidence in the investment.”