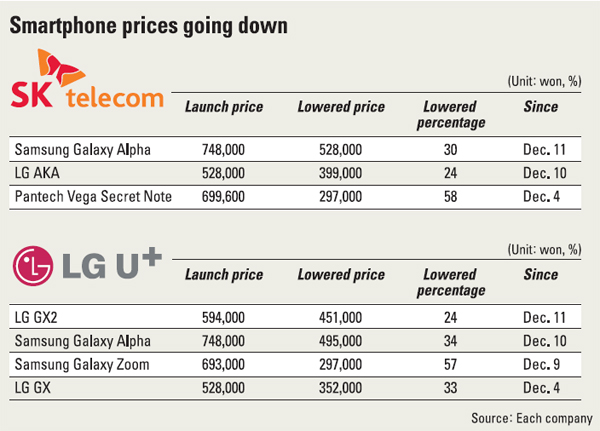 Mobile carriers have started lowering smartphone prices as they try to increase sales and boost the communications market through legal means instead of offering excessive subsidies.

The discounts offered by carriers differ by smartphone and monthly plans. The subsidy ceiling set by the government is 300,000 won ($272).

When consumers receive the maximum 270,000 won subsidy by subscribing to SKT’s 76,000 won monthly plan, they can get their hands on the Galaxy Alpha phone for 258,000 won.

The Galaxy Zoom 2, meanwhile, has been retailing at 297,000 won from LG U+ since Dec. 9, 57 percent lower than the recommended retail price.

KT has not announced a plan to lower smartphone prices. It said it is in discussions over costs with smartphone manufacturers but that nothing has been determined so far.

However, some critics see the price cuts as merely a way for carriers to unload unpopular smartphones by the end of year.

“We are pressured to shift stocks, but currently, due to many regulations, there is no other way to attract customers other than by lowering prices,” said a retailer of one of the three mobile carriers.

“Since the implementation of the Mobile Device Distribution Improvement Act, the manufacturers and mobile carries both feel a responsibility to lower the burden of household communication fees,” said a spokesman for LG U+. “According to the stock volumes and conditions of each carrier, smartphone prices could continue to be lowered.”