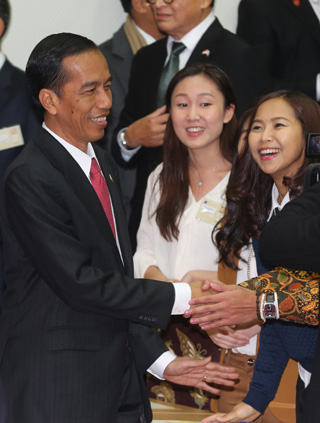 Indonesian President Joko Widodo, left, shakes hands with Indonesians waiting in the audience as he enters the auditorium at Kyungsung University on Thursday night in Busan. About 300 Indonesians, who are students, migrant workers or immigrants by marriage, were invited to the special lecture. By Song Bong-geun

BUSAN - Indonesian President Joko Widodo pledged in the presence of Indonesian students and others at a Busan university on Thursday that he would create more jobs domestically so that the citizens of Indonesia wouldn’t need to seek out employment overseas or risk injury or death at work.

His remarks followed a brief moment of silent for some 35 Indonesian crew members who went missing from a Korean fishing vessel that sank in the Bering Sea on Dec. 1 just off the Russian coast. The lecture at Kyungsung University was part of Joko’s visit to the Asean-Republic of Korea Commemorative Summit.

Indonesia is a member of the Association of Southeast Asian Nations, or Asean.

About 300 Indonesian students attended the lecture, as well as Indonesian women across Busan and regions nearby who immigrated to Korea after marrying Korean men.

President Joko, who assumed office just two months ago, visited the Daewoo Shipbuilding and Marine Engineering shipyard in Busan before his address.

He said he was surprised by the shipyard’s size and thought about how lucrative it would be to have such a facility in his home country.

In addition, he encouraged Indonesian students to learn a wide range of technologies while in Korea so that they could contribute to driving Indonesia’s economic growth when they returned.

After the reform-minded former governor of Jakarta concluded his lecture, he summoned all those who had questions to come to the podium. Joko shook hands with each one and proceeded to hold a question-and-answer session.

The president insisted on providing detailed answers for each question, which resulted in the event running long past its scheduled one hour.

When attendees shouted, “Photo! Photo!” he allowed each group of 30 to stand side by side with him on stage for a picture, which required some 10 rounds. He then proceeded to shake hands with the line of Indonesians waiting outside, which took about another 20 minutes.