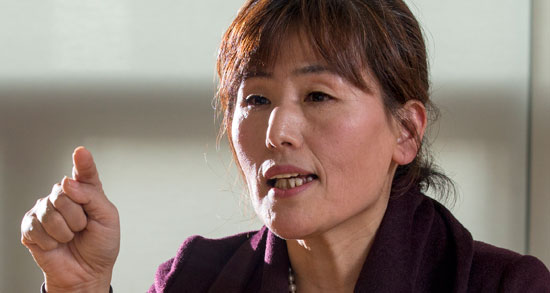 Lee Eun-kyeong wrote the book, “The 50 Secrets Day Care Centers Don’t Tell Mothers” to reveal the corruption rampant at child care facilities. She has fought to fix these problems for 17 years. By Ahn Seong-sik

The book revealed the untold stories within day care centers - how workers might feed 90 children with a single cooked chicken, or how some center directors embezzle surplus activity funds.

“I am not afraid to expose those facts to society,” she said. “I will keep sharing my opinions about those issues.”

Lee was just an ordinary full-time mother before establishing her own day care center in 1997. She decided to open it thinking the job was a suitable fit given her love for children.

But problems began to surface when she realized she was bringing in less than a million won ($907) per month. Even though she hadn’t expected much money from her business, she suspected something wasn’t right, and that government reform was necessary to solve the problem.

“The government said it didn’t have enough money for child welfare and encouraged private participation,” she said. “But it seemed that the government didn’t much care about the private sectors involved in child welfare.”

So Lee confronted the public officials in charge of child welfare to figure out what was wrong. She requested the officials either increase the budget for child welfare or ease accounting provisions. But in doing so, she was merely told that it was a tough time financially for the nation.

More surprising, however, were the reactions from other day care center directors.

“Many of the directors around me said, ‘You don’t need to sweat making all the noise. It’s pointless,” Lee said. “They told me to pocket some of the money from lunch fees or to cut teacher’s salaries like other directors had done.”

That advice provoked Lee to gather other day care center directors with similar opinions about corruption in the system.

The group made visits to the National Assembly and met with government officials to expose the chronic financial problems plaguing day care centers - and to urge an overhaul of the welfare budget for children to ultimately eradicate graft.

But as time passed, those people who were once passionate started to dwindle one by one, leaving Lee to carry out a lonely battle.

“I could also overlook prevailing problems at day care centers and secretly take 20 million won a month,” Lee said. “But the reason why I’m investing my time and effort into fixing these issues is because I don’t want to pass down these unethical practices to the next generation.”

Lee wanted to directly appeal to the parents who send their children to potentially corrupt day care centers, so she decided to write her book.

Yet, even her family tried to prevent her from propelling her protest - her in-laws told her that they would break off their relationship with her unless she gave up her fight. But after seeing her determination, her father-in-law finally allowed her to pursue her cause.

“My father-in-law passed away last year,” she said. “I want to visit his grave after contributing to solving the problems rampant at day care centers and tell him, ‘I finally did it.’”

When it comes to the controversy over the Nuri program, the state-subsidized free day care for children aged 3 to 5, Lee added that the program would only be in vain unless day care centers were reformed.