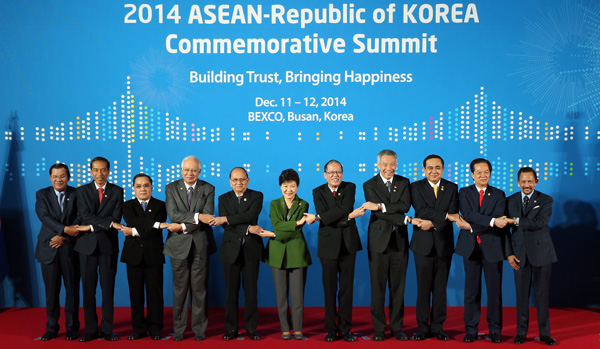 President Park Geun-hye, center, and Asean leaders pose for a photo at the Asean-Republic of Korea Commemorative Summit in Busan on Friday. [Joint Press Corps]

BUSAN - Asean and Korea on Friday reiterated their shared stance on the early denuclearization of North Korea and stressed the importance of creating conditions for the North’s “complete, verifiable and irreversible denuclearization.”

“Korea and Asean share the view that the security of Northeast Asia and Southeast Asia is tightly connected and vowed to step up cooperation in security matters to create sustainable peace and stability in both regions,” said President Park Geun-hye in a speech at a joint press conference with Asean host President Thein Sein of Myanmar at the end of the two-day Asean-Republic of Korea Commemorative Summit.

The summit between Korea and Asean is the first multilateral event the Park administration has hosted.

“We urge the DPRK to fully comply with international obligations under all relevant UNSC Resolutions and commitments under the 19 September 2005 Joint Statement of the Six-Party Talks,” a joint declaration said. “We also highlight the importance of enhancing dialogue and creating necessary conditions for the resumption of the six-party talks, which would pave the way for the complete, verifiable and irreversible denuclearization.”

The declaration on North Korea marks progress from the Asean-ROK Commemorative Summit in Jeju in June 2009, which simply mentioned a “peaceful resolution of the North Korean nuclear issue through six-party talks.”

The statement five years earlier read: “We recognized that enhanced peace and security on the Korean Peninsula through dialogue and cooperation is essential for the peace, security and stability of the region. To this end, we are committed to continue our efforts to reduce tension and promote dialogue on the Peninsula, including those to achieve an early resolution of the North Korean nuclear issue in a peaceful manner through the Six-Party Talks process.”

Discussions on further liberalization of the Asean-Korea free trade agreement for greater mutual benefits were also touched upon in the declaration Friday. That was the main topic of discussion in the first of two multilateral talks earlier in the day.

Asean was Korea’s second-largest trading partner as of last year. Compared to 1989, the trade volume between Korea and Asean jumped 16-fold to $135 billion. Asean has now set a goal to raise trade volume with Korea to $200 billion by 2020.

The member nations also vowed to continue to enhance regional economic partnership and integration through the timely conclusion of Regional Comprehensive Economic Partnership negotiations by the end of 2015.

The main topics of the second session were non-security issues focused on climate change and disaster management.

Ahn Jong-beom, senior presidential secretary for economic affairs, said the second session produced two meaningful achievements. First, Korea proposed business models that showed that climate change or natural disasters that countries around the world (including Asean members) go through can be an opportunity, not only a crisis.

Second, according to Ahn, was that President Park came up with detailed measures for the first time on how to utilize the financial aid received from conglomerates for the Green Climate Fund and Global Green Growth Institute.

One of the business models Park proposed is combining new and renewable energy with existing energy storage systems, an energy saving solution for households and commercial buildings, so that isolated regions or islands could be provided electricity around the clock.

On the back of President Park’s efforts to get commitments from countries around the world to the Green Climate Fund, the official commitments now total $10.2 billion.