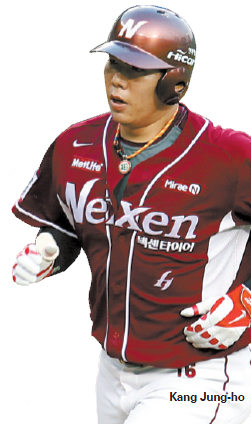 Kang Jung-ho of Nexen Heroes will be posted in the MLB’s system on Monday, but he is already drawing attention from the league before the process begins, adding to hope that his fate will be different from two others - Kim Kwang-hyun and Yang Hyeon-jong, who failed to make the move.

The official MLB website ran a story about the 27-year-old shortstop on its home page, citing details from major sports media like FoxSports.com and CBS Sports.

“Although the shortstop market is thin, many clubs view Kang as a second baseman. CBS Sports reported Monday that the Mets, Giants and A’s are interested in the infielder,” read the story.

Kang is a rare power-hitting shortstop. He had a .356 batting average, .459 OBP, 1.198 OPS with 117 RBIs and 40 homers this year, making it his best season in nine years with the team, including two at its predecessor, the Hyundai Unicorns. He was also selected as the MVP of the second round of the postseason this year, leading Nexen to the Korean Series for the first time.

But Kang will be at a disadvantage in the MLB if his position is changed to second base. He has played as the shortshop since 2008, when the team was known as Woori Heroes, because of his strong shoulder. He is also a four-time Golden Glove winner, taking the award this season.

Another part of Kang’s playing that may be seen as a weakness is his swing.

The right-handed hitter lifts his left knee before swinging, assuming a certain kind of pitch and location.

Few hitters who lift their knee on a swing have succeeded in MLB.

But Kang is expected to receive larger bids from MLB teams than Kim and Yang, possibly up to $10 million.

SK Wyverns’ left-handed pitcher Kim, who won 13 games this year with his 150-kilometer per-hour (93-mile-per-hour) fastballs and nasty sliders, was put in the posting system in early November and received a disappointing $2 million bid from the San Diego Padres. SK accepted the deal anyway, but could not conclude the contract after a month of negotiating. Kim decided to stay with the Wyverns.

But in staying in Korea, Kim set another record. The SK Wyverns offered him a 600 million won ($543,000) annual salary, which is more than a double the 270 million won he received last year. The increase of 330 million won in one year is the largest pay increase in the league, excluding free-agent players.

Another lefty, Yang of Kia Tigers, also gave up on switching over to an MLB team because the largest bid he received was reportedly even smaller than Kim’s. The Tigers rejected the deal, saying it was a matter of pride.