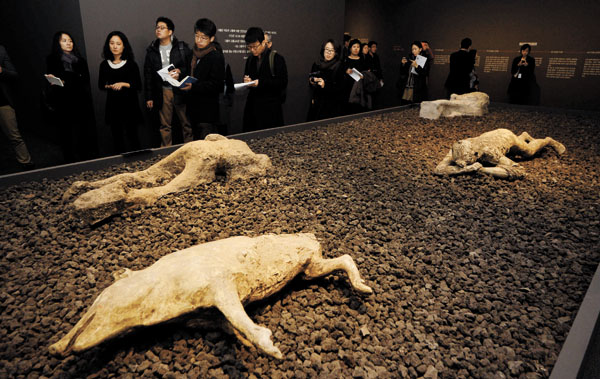 At the exhibition, “Pompeii: Culture of the Ancient Roman City,” visitors can see casts of humans and animals that perished on the day Mount Vesuvius erupted. [NEWSIS]

For its final special exhibition of the year, the National Museum of Korea has chosen to highlight the ancient Roman city Pompeii, which was destroyed when Mount Vesuvius erupted on Aug. 24, A.D. 79.

This is the first show in Korea dedicated to Pompeii since 1997. Back then, the exhibition was on a smaller scale, displaying mostly sculptures. The latest exhibition is larger, featuring about 300 sculptures, frescoes, paintings, pieces of jewelry and furniture, and kitchen utensils. But the showstopper is the casts of humans and animals. 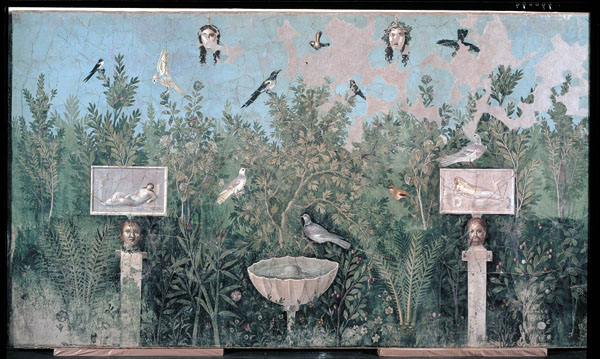 Frescos are highlights of the exhibition at the National Museum of Korea. They show the luxurious lifestyles the people of Pompeii led when the city flourished. Provided by the museum

Archaeological discoveries happen in many places, but experts often have to spend a lot of time and energy deciphering what the relics found were used for or what they stood for. But this is not the case with Pompeii, the museum officials said in a press release, which is one of the many reasons the city has amazed people for centuries.

Pompeii was buried under tons of ash, which meant it was preserved because of the lack of air and moisture. It remained untouched for about 1,500 years, meaning that the discoveries made at the site encapsulate its very moment of demise with startling detail. 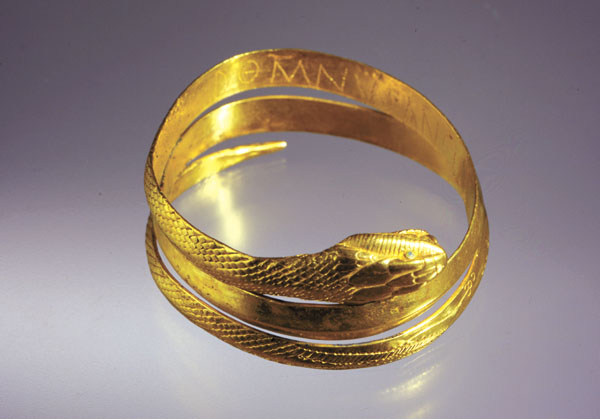 This bracelet, one of jewelry on display, has an engraving in Latin, “From master to slave.”

“[At Pompeii], how people lived and what the city looked like up until the very moment of the eruption are captured just as they were,” Kim Young-na, the museum’s director said. “So, in a way, you can say that the archaeological discovery resurrected a scene from history.”

The exhibition, titled “Pompeii: Culture of the Ancient Roman City,” begins with a reconstruction of a typical Pompeiian house, which revolves around an atrium - a spacious central hall with gardens and fountains. Homes in the city were often decorated with frescos, which usually depicted landscape or myths, and statues.

Fifteen large frescos - which measure on average somewhere between 200 to 300 kilograms (441 to 661 pounds) each - have been brought to Korea for the exhibition.

A section dedicated to jewelry, cosmetics and accessories is also of interest as it provides a glimpse into the luxurious lifestyle led by the Pompeiians. While Roman law mandated that men were only allowed to wear one type of jewelry, a single signet ring, that was not the case for the women of the city.

Relics show that Pompeiian females decorated their hair with several accessories, wore necklaces and rings of various sizes and put on makeup. Intriguingly, a bracelet with the Latin engraving “From master to slave,” indicating an intimate relationship between people from opposing social classes, can also be seen in this section.

A segment dedicated to Pompeii’s final days displays the casts of humans and animals in a reconstruction of the tragic day when the flourishing city was obliterated. A man is seen crouching after apparent suffocation. A dog seems to twist his body in pain.

“The excavation team [led by Giuseppe Fiorelli] kept finding relics and sometimes even bones from cavities in Pompeii,” Gu Moon-gyoung, the museum’s curator says, “and when they poured plaster into the voids they found forms of humans as well as animals and plants that perished in the eruption.”

“Pompeii: Culture of the Ancient Roman City” runs until April 5 at the National Museum of Korea in Yongsan District, central Seoul. Admission is 13,000 (about $12) for adults; 11,000 won for middle school, high school and university students; 8,000 won for elementary students; and 5,000 won for preschoolers. Go to Ichon Station (lines No. 1 and 4), exit 2.