A decade of ups and downs at the Kaesong complex

A decade of ups and downs at the Kaesong complex 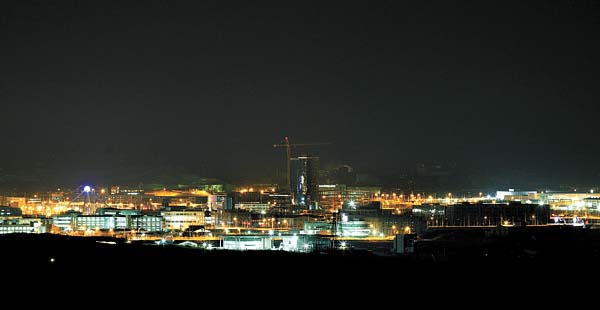 A view of the Kaesong Industrial Complex at night. [JoongAng Ilbo]

In December 2004 the first products rolled off the manufacturing line at a South Korean homewares company stationed in North Korea’s Kaesong Industrial Complex.

Since the cooperative industrial zone between the two Koreas started operating, the value of the accumulated products that have rolled out of the production line is expected to exceed $500 million by the end of this year.

The achievement is the result of the combined efforts of 54,000 South and North Korean workers.

The complex has been through ups and downs, and at one point it was even threatened with permanent closure. 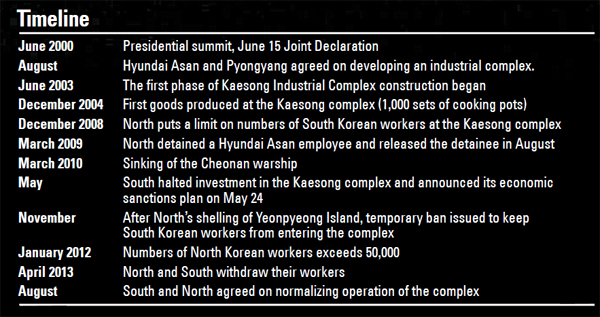 However, it has in one way or another, benefited both Koreas. For South Korea, the products manufactured at the Kaesong complex in the past decade contributed about $3.26 billion to the domestic economy, including accumulated revenue worth $2.2 billion.

For North Korea, it has generated $380 million, including $300 million of income for the workers.

But for the industrial complex to reach its potential, there are still many hurdles to overcome.

The 3.3 square-kilometer (1.3 square-mile) area taken up by the complex is only the first phase of the original development plan, accounting for 5 percent of the total area.

Additionally, only 125 South Korean companies operate a plant in the industrial complex, when the South and North Korean governments’ plan included 300 companies.

Political and military tension between the two Koreas has led the North to restrict the number of workers it contributes. Another major problem is that Western economies, led by the United States, do not recognize products manufactured from the complex as South Korean goods.

The biggest disadvantage of the Kaesong complex is how heavily it is impacted by political and military disputes.

On multiple occasions, political strain has caused foreign buyers to cancel their deals with South Korean companies at Kaesong, as well as reduced or halted production and fewer exports.

The two biggest incidents were in December 2008 and last year.

The shooting of a South Korean tourist at Mount Kumgang in July 2008 ratcheted up political pressure, and the North Korean government decided in December to limit the number of South Korean employees that could either live at the complex or travel to and from South Korea to the area. In April last year, Kaesong Industrial Complex was shut down unexpectedly by North Korea for 160 days. It was only in mid-September that the two Koreas reached an agreement and the factory lines were fired up again.

Experts say that for the Kaesong plants to continue to develop, the two countries should agree that political issues and the economic cooperation should be completely separate.

After last year’s incident, the Koreas created a joint committee to prevent any problems so that Kaesong will not have to stop operating.

There are also arguments that in order to propel Kaesong’s progress, the South Korean government should ease regulations that could limit new investments in companies operating there. Local companies that are relocating overseas due to increasing labor costs in South Korea could consider Kaesong instead.

Joint fashion brand Sisbro became popular after it provided the uniform for volunteer workers during Pope Francis’ visit to Seoul in August. The brand, which was created by seven South Korean companies operating in Kaesong, needed to expand its production line with more investment. But the move was blocked because the South Korean government has limited new investments since North Korea torpedoed and sunk the South Korean battleship Cheonan.

Another problem is countries that are willing to import. Although China, in its recent FTA with South Korea, accepted products manufactured at the complex as South Korean, major economies including Europe and the United States have refused to give them the reduced tariffs that other South Korean products enjoy.

Other big steps toward making Kaesong more productive are the second and third phases, which are targeted at attracting South Korean service industries including tourism and logistics. Currently textile and fashion companies make up the majority of the businesses operating at the industrial zone.

Kaesong Industrial Complex’s role as a symbol of economic cooperation holds much more significance than dollars and cents.

The Hyundai Research Institute report noted that establishing legal and systematic mechanisms and an industrial infrastructure, and the connections that have been made in the development and management of Kaesong, make it a testing ground for unification. The report advised that a system that guarantees exclusion of political or military influence should be created. It added that it would benefit both Koreas if the economic special zone had a larger workforce from North Korea and a wider array of South Korean companies operating within North Korea.