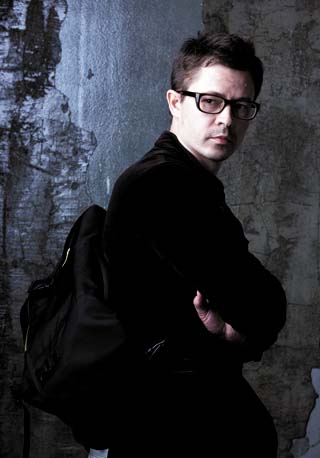 Jonson Porteux, a visiting lecturer specializing in global and interdisciplinary studies at Hosei University in Tokyo, recalled a period in which he would participate in nighttime activities with Korea’s gangster elite for his research. By Kwon Hyuk-jae

Organized crime in Korea is an unlikely subject for a foreigner to try to tackle, but one American political scientist decided not just to research gangsters here but immerse himself in their lifestyle.

Jonson Porteux, a visiting lecturer specializing in global and interdisciplinary studies at Hosei University in Tokyo, recalled days in which he would spend his mornings talking with police officials for his research and then be picked up by gangster elites for nighttime activities.

“I lived that geondal lifestyle with them,” he said during a series of spoken and written interviews with the JoongAng Ilbo and the Korea JoongAng Daily.

Geondal, which literally translates to “good for nothing,” refers to Korea’s organized crime elite.

Porteux accompanied them practically everywhere across the country - on ski trips, at weddings, room salon visits or on luxury boat rides.

He referred to the gang leaders as hyungnim, a respectful way of saying “older brother” in Korean, or “oyabun,” Japanese for “father” or a yakuza boss.

As a doctoral candidate at the University of Michigan, Porteux boldly chose to research organized crime in Korea in the 21st century, a topic that many foreigners, and especially Koreans themselves, have extreme difficulty accessing.

“One area of interest that political scientists have surprisingly neglected is organized crime, especially mafia-type groups, even though it deals with the heart of discipline - power,” he said. “Perhaps one reason why this area has been so neglected is the difficulty in accessing this very closed, purposefully ambiguous world, where there is extremely limited data to analyze and work with.”

For example, Porteux explained that “it was just as difficult to get the candor and trust of the prosecutors and police as it was … from gangsters. It took a lot of time and effort.”

He conducted field work on the subject in Korea between 2010 and 2011 while on a Fulbright scholarship, and completed his doctoral dissertation, “Police, Paramilitaries, Nationalists, and Gangsters: The Processes of State Building in Korea,” last year.

His inspiration came, in part, from former Justice Minister Kim Jung-gil, a visiting scholar at Michigan Law School, who connected him up with key Korean prosecutors and police officials who dealt with organized crime. Other contacts included business people, bureaucrats, politicians and even victims.

But Porteux lucked out from the connections he made at his local gym, who introduced him to gang leaders and “behind the scenes” power brokers. The gangster elite embraced him because, as a foreigner who spoke Korean, he was “a novelty.

“I would meet one Dumok [boss] and he would introduce me to his captains,” he said. “Because I knew this one captain who was in his early 40s, I would meet all other the other captains of different groups in Seoul, Busan, Pohang and elsewhere, who were in the same age group. You can’t do that in the U.S. You don’t have these different mafia groups hanging out with each other,” he said.

Soon, Porteux became an “outside insider.”

He was tested at first, he said, and recalled one incident in a room salon with a group of all Korea’s gangster brass.

“One boss told me to dump a bucket of ice water on one of the other gangsters who was standing up and singing,” he said. “If I refused the order of one boss, I’d be in trouble with him, but if I obeyed, the one that got the water dumped on him would have been humiliated and would have been forced to retaliate. So, I decided to stand up and dump the cold water on myself.

“Their job is to intimidate people, and they do a good job of it. I can’t act like I’m scared; [I have] to act like I’m one of them, the same kind of animal that they are.

“From then on, they showed me respect,” he said. “And they trusted me. I told them exactly what my research was about.

“If you look at the captains and bosses, they have … money. They are driving their Equus or Benz or Bentley,” he said.

“I’ve seen buckets of swords in certain areas,” Porteux continued, describing one gangster boss’ apartment in the posh Gangnam area that “had stashes of weapons,” which included baseball bats, axes and sashimi knives - though rarely guns.

“Who are you going to be more afraid of? The police officers coming in threatening to arrest you, who you know, for the most part, have to follow due process of the law, or the gangsters coming in with their baseball bats?” he said.

“They have more capacity to control less-organized criminals and [criminal] groups, including those of foreign origin, than the police do. And the police know this.”

He added, “The Korean mafia is an extreme meritocracy. If you are not a smart gangster, you are not going to move up. Unlike the Cosa Nostra in the United States, or Japanese Yakuza, money in Korean mafia-type groups typically flows from top to bottom. If a boss can not provide money-making opportunities to a large number of gangsters below him, he simply can’t be a boss.”

The crux of Porteux’s research focused on the symbiotic relationship between the state and mafia-type groups, and why those within developed democracies tolerate, and sometimes even cooperate with, criminal organizations. Through triangulation, verifying events from multiple sources, he was able to build up his information database.

Porteux recalled memorable two-day street riots on May 24 and 25, 2011, when he witnessed a confrontation between illegal street vendors in the popular Insa-dong in central Seoul, and the yongyeok - legal companies often controlled by gangsters to use violence - hired to take them down.

There were police lined up in their riot gear and street vendors next to their carts with their protest headbands on, he said. And about 150 young thugs in their 20s from outside Seoul, who were controlled by geondal, “went from street vendor to street vendor beating them in front of the police.”

“They got the carts and they were throwing [them], breaking everything down,” he said. “Men are beating men, women are beating women … some even the elderly.”

He recalled an elderly woman at one vendor with blood on her face. “She said to the police, ‘You’re supposed to protect us. Why aren’t you protecting us?’ And the police officers just ignored her.

“The street vendors are not innocent,” Porteux added, “and they need to escalate visible violence to the point where society actually cares, and this violence is basically a part of their strategy.

“I’m thinking, as an American, this should not be happening in a democracy. It should be the police enforcing such contracts. The street vendors are essentially breaking a social ‘contract’ because they are operating illegally. They are selling similar goods that the businesses are, not paying rent, not paying taxes. … They are breaking the law.

“In many ways,” he pointed out, “much of the cooperation revolves around a ‘don’t ask, don’t tell’ policy. … Police don’t ask, and the gangsters don’t tell.”

According to the National Police Agency, there are 216 organized crime groups in Korea, with a total of more than 5,300 members.

Porteux is currently conducting similar research on policing in Japan and the processes from which violence becomes democratized, especially in Zainichi (ethnic Korean) communities, where his background in Korea helps.

During his research here, he was careful not to relay any information between the police and the gangsters, despite frequent meetings with both sides during his fieldwork. “I did my best, though, to make sure that they never had to ‘trust’ me with information.

“The fact that I’m a foreigner afforded me a lot of protection,” Porteux added. “If I was a Korean, I could not do this; it would be dangerous.

“There’s always the potential for conflict - you can feel the tension in the air, and I witnessed the threat of violence, especially when alcohol was abundant, but I never had violence directed at me from those organized groups.”

But, he said, “With a slight smile on his face, one of the oyabun I often met with told me that if I betrayed him or the organization, I’d die. I think he was only half joking. I replied, ‘I’d commit suicide before I’d do that.’

“They liked my answer.”