EXID’s members debuted in the music scene in 2012, but a viral video recently brought them fame. Provided by Yedang Entertainment

The popularity of the digital single is short-lived. Music comes and goes quickly, and a No. 1 song today is replaced by another new release tomorrow.

Just a few songs survive in the sea of new music, but they are soon pushed aside in a couple of days.

To put it simply, if a song fails to steal the limelight upon release, it has a slim chance of making it big in the fast-paced music industry.

But “Up and Down,” a digital single originally released in August by five-member girl group EXID, is climbing up the charts and making it into the top 10 on major music portals’ best-selling lists these days - largely thanks to a video file recorded by one of the band’s fans. 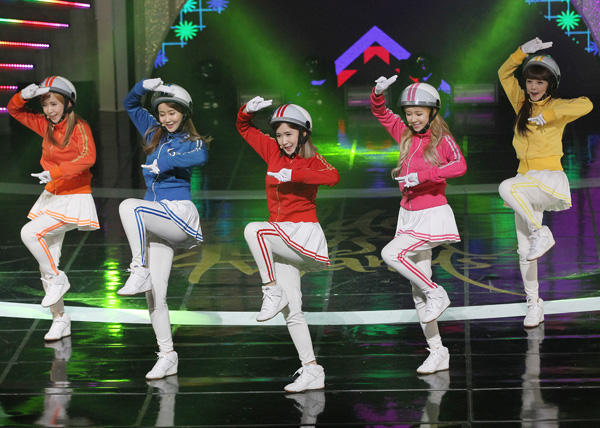 Girl group Crayon Pop is another beneficiary of the digital fandom. [JoongAng Ilbo]

As the jikcam, meaning a video recorded by an individual fan, has gone viral on social media, the girl group, which failed to impress the public with “Up and Down” when it was released in August, is appearing on weekly music shows and holding street concerts three months later.

In the original jikcam uploaded in October, a fan recorded Hani, a member of the girl group, rocking her pelvis back and forth while wearing body-hugging micro shorts. The jikcam keeps following the girl group member’s buttocks.

The short video containing the suggestive dance moves brought “Up and Down” - which was not even included in one of the 100 popular songs in August - to life. And the clip has been spreading like wildfire through social media since October.

Based on the video’s immense popularity, EXID ranked seventh on KBS’s “Music Bank” on Dec. 5 and eighth on MBC’s “Show! Music Core” on Dec. 6.

Although the girl group modified its dance to be suitable for TV broadcasts, the popularity of EXID shows no sign of slowing down.

Everyone from teenagers to K-pop singers have been covering the girl group’s dance.

Industry insiders all agree that social media has truly benefitted the girl group.

According to Tapacross, a company that analyses big data on the web, 76 percent of the times EXID was mentioned online was in Twitter posts, while its appearance in online news articles was 12.5 percent of the time in recent months.

Without the overwhelming support on social media, “Up and Down” could have disappeared forever.

Fandoms have been around for many years but are entering a new phase in combination with social media. A group dubbed “prosumers” - a portmanteau of producers and consumers - has been created as a result.

The newly released book “2015 Vivid Trend” describes prosumers as aggressive consumers who produce content such as jikcam and distribute it.

They also sometimes earn profits in return for their creations.

“But they are not as strong as classic fandoms. For this reason, the digital fandom tends to evaporate easily.”

The digital fandom also proves that consumers are surfacing as another pillar of the media along with traditional channels such as TV music shows.

“TV music shows are not attracting viewers like they used to,” said music critic Kang Tae-kyu, who is also a professor of practical music at Gangdong University.

“Music producers are well aware of such a change in the media environment. And this change means any content can be consumed by any means if it is good.”

But Kang said not everyone can benefit from the digital fandom.

“Two strings are attached to the success of social media. The dance has to be tempting enough so that it encourages people to imitate it and the music has to be addictive so that people want to listen to it over and over again.”

Singer-rapper Psy and girl group Crayon Pop have also been beneficiaries of the digital fandom.

The music videos of Psy’s “Gangnam Style” and Crayon Pop’s “Bar Bar Bar” first became famous on the web, especially through social media, and were then introduced to a larger crowd.

Similarities can be drawn between EXID and Crayon Pop’s case.

Just like EXID, which debuted in the music scene in February 2012, Crayon Pop launched in July 2012 but failed to carve out a name for itself.

In a last desperate attempt, the five-member girl group decided to get wacky last year by wearing safety helmets and uniforms in a move that is the opposite of how other girl groups, who adopt a sexy image, conduct themselves.

Although the move did not initially work out well, a quirky music video by the girl group went viral, leading to “Bar Bar Bar” climbing up the digital music charts a month after its release.

What differentiates Crayon Pop and EXID, however, is their content, because EXID stole attention due to their explicit dance moves.

Because of this, some downplay EXID’s success, snubbing it as a publicity stunt that uses a sexy dance.

But others say the song “Up and Down” is addictive enough to have staying power.

Having been created by Sinsadong Tiger, who has made albums for Beast and 4minute, the composer said he tried to gather “girls who are able to produce.

“I know this song is quite controversial in a way that it presents its lyrics and dance, but this team surely has a lot of things to offer in the near future,” he said.