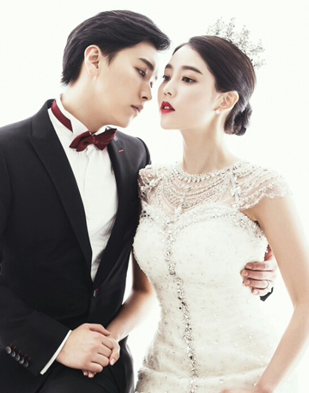 Sungmin, a member of the K-pop phenomenon Super Junior, wed musical actress Kim Sa-eun on Dec. 13 at Raum, Yeoksam-dong, southern Seoul. He is the first from the band to marry.

About a thousand people attended the ceremony, including family and close friends, including Sungmin’s fellow musicians. Ryeowook, one of the members of Super Junior, was reported to have served as one of his wedding singers.

Following the wedding, the couple left for the Maldives for their honeymoon.

According to local media, Sungmin and Kim became friends when they performed in the musical “Three Musketeers.”

After months of dating, the 28-year-old singer uploaded a message on Super Junior’s official web page in October announcing that he planned to marry.

After the news went public, some news outlets questioned his decision, claiming it seemed hasty, though the singer adamantly denied rumors of a shotgun wedding.

Similarly, Sunye, a member of Wonder Girls, got married last year while performing as part of the quartet. She was the first in the group to wed.