Volunteers find purpose at Angel House for the disabled

Volunteers find purpose at Angel House for the disabled 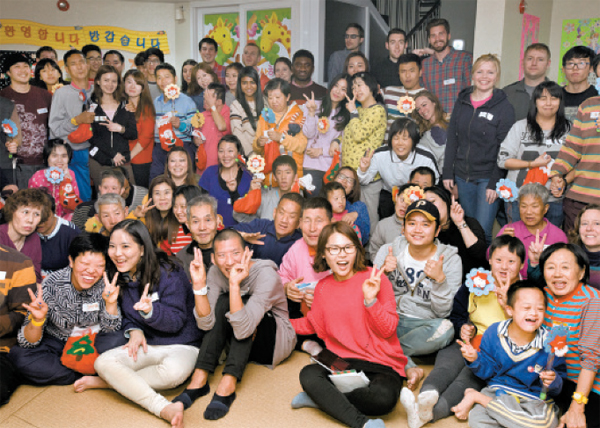 The residents of the Angel House Orphanage and members of the international volunteer group pose for a photo at the house after making Christmas crafts on Dec. 6. By Park Sang-moon

The residents of the Angel House Orphanage, a home for people with mental disabilities, looked out the window when they heard that an international volunteer group was making its way toward the house.

From the second floor, some waved to the group through the window, and some came to the door to greet them. “Nice to see you again,” said Ahn Hong-seong, one of the residents, taking the hands of the volunteers.

The group stops by the home on the first Saturday of each month, and Dec. 6 was its last visit of the year, marked by a Christmas theme.

Angel House, located in Goyang, Gyeonggi, serves as a safe place for its 38 residents who have no other place to stay.

The volunteer group was organized in 2009 when Kiki Valentina Fastino, whose Korean name is Kim Yoo-Kyeong, realized that many of the foreign residents around her wanted to participate in some sort of philanthropy but didn’t seem to know where to start.

After making a personal visit to Angel House with her American friend, she made a Facebook page for an Angel House volunteer group.

On Dec. 6, the 33 volunteers gathered in the lounge and separated into four groups: one to do laundry, cooking, cleaning or crafts. About a dozen people moved to the second floor to wash the residents’ clothes by hand.

Although there are washing machines in the house, some are broken so washing clothing by hand tends to be more effective.

That’s why the laundry group should be the biggest, said Elizabeth Vargas, who started coming to Angel House in 2011.

Vargas has always loved volunteering, and when she decided to come to Korea in 2011, she made up her mind to do something good for other people. So she went through Facebook and found the Angel House group.

“I really like coming here because when you walk in, everybody is like ‘Annyeong eonni [Hello, sister]!’” Vargas said. “They give you something that most people can’t give you, which is true feeling and true love. It’s so nice to feel when you come in.”

On the first floor, a smaller band of five was busy chopping vegetables and preparing dinner. The menu for the day included gimbap, tteokbokki and fish-cake soup. Joseph Poltzer stood among four Koreans in the group, cutting fried fish for the soup.

He is devout in his faith, he said, and enjoys taking care of the less fortunate. He found the Angel House group, he added, through a Google search.

Poltzer said he has been to several orphanages before, but what he likes about Angel House is that the volunteering is more hands-on and more practical, not simply just talking or playing with residents.

But he acknowledged that it was difficult to find certain volunteer opportunities. “I don’t know where to go for standard volunteering like working at senior centers or prisons,” he said. “I haven’t found any of those here. I don’t know if that even exists or not.”

Later, some of the volunteers who had finished their assignments got together on the first floor to help residents make crafts for Daiso, a uniform-price household supply store, which is how the residents earn money. Siting down in a circle on the floor, volunteers and residents assembled bathroom soap hangers.

Gabriel Lincoln, from the United Kingdom, has traveled to 20 countries so far, including Korea. Because he enjoys volunteering, he tried to find something to do that would help people when he moved to Korea six months ago.

“A day without an adventure is a day wasted,” Lincoln said. “That’s why I volunteer in Korea.”

Besides Angel House, he’s done other types of volunteer activities such as working at animal shelters and soup kitchens, he added.

Kara Sponsler also sat down on the floor to join the Daiso crafting. She currently lives in North Chungcheong, and it took her three hours to get to Angel House by subway, she said.

“I read some books in the subway, so it wasn’t boring on my way here,” she said.

As the clock hit 6 p.m. the residents and volunteers had recreation time, which was marked by a Christmas theme: They played Christmas carols, made Christmas crafts and handed out red stockings as early gifts.

“The residents especially liked the watches,” said Jang Jeong-won, the Korean organizer of the volunteer group. “Over the past two months, the residents told me they wanted watches, so I promised to bring one.”

Despite his efforts to figure it out, he said he still wasn’t sure what prompted them to want the watches.

Williams Kyei said he doesn’t come here for himself, but for the residents. As a sports management student at Seoul National University, he has a special place in his heart for the physically disabled and has worked with disabled athletes in Ghana.

“I put myself in their shoes, and I do it whole-heartedly,” Kyei said, holding up the Christmas craft he made. “This Christmas means so much for them. The smiles on their faces alone tell you that they are really happy.”

Robbi Van West and Ellene Hartounian came to Korea four months ago. As a couple, they try to do something new every weekend, and this time they decided to do something with the focus on others.

But when Hartounian tried to find a volunteer activity, it was difficult, as most volunteer organizations don’t provide information in English. And when she sent emails for information, nobody replied, she said.

“I am sure there are a lot of organizations like Angel House,” Hartouian said. “But for foreigners, if they don’t have an English website, it’s very difficult for us to find.”