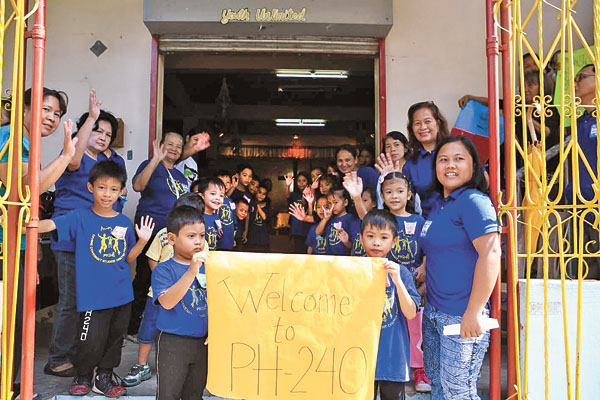 Children in the Philippines who are sponsored by Compassion Korea welcome participants of a trip organized by the charity at its Compassion Center in October. Provided by Park Ae-ran, Compassion Korea

Carol Yi, 30, who works at a financial company in Seoul, said she used to be “very skeptical” about how donations are spent by nonprofit and nongovernmental organizations (NGOs) in Korea. She said she felt like these charity groups were using “sick and dying children in starvation and poverty at the forefront as a marketing strategy to collect donations from others.”

Yi also added that she was concerned about how her cash was being spent.

“I always thought the money was not being used as much for the actual causes but rather for the organizations’ operational costs,” said Yi.

However, she changed her mind after a recent trip to the Philippines with Compassion Korea, a nongovernmental Christian child-sponsorship organization that focuses on the development of children living in poverty.

While there she witnessed how the charity has helped change the lives of some of the nation’s children for the better and learned about how its field office spends its money.

“I could tell that it is a transparent organization when I visited its office in the Philippines and saw how they operate by looking through their balance sheets, audit reports and meeting staff and volunteers,” said Yi. 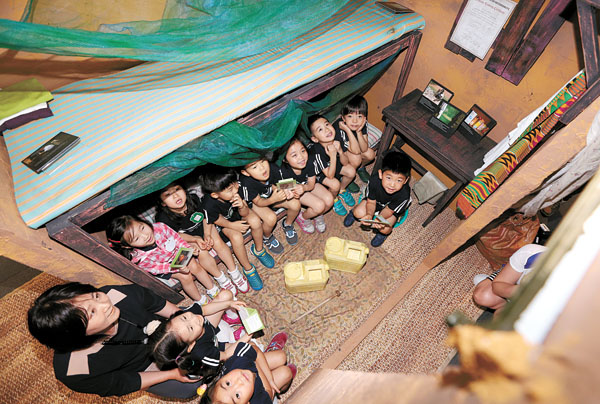 “You see the children benefiting from the sponsorship by reading through their growth records that Compassion documents meticulously. It was awesome to see graduates of the Compassion program become sponsors and volunteers or become staff to give back and love the children. I could really trust the organization and decided to sponsor a child.”

After coming back from the trip in October, Yi registered to sponsor a boy in the Philippines. But she wanted to give money to another girl she had met on the trip, who lost her house when tropical storm Mario caused severe flooding over Metropolitan Manila on Sept. 19.

“The girl had to live with her aunt after losing her house in a recent storm that hit the country,” said Yi. “The day I met her was the day her mother was leaving for the Middle East to work as a maid.”

Yi had to wait for Compassion to check whether the child could be sponsored but she was finally registered last Friday.

The season of giving is in full swing. Those who are considering donating a little this year may be checking their budgets, wondering just how much to give to charitable causes and where to donate.

Yi isn’t alone in her concern about whether her money is being spent where it should be - especially when the cash is used overseas rather than for the needy in Korea. There are those who are less willing to supply money to overseas charities when there are so many unfortunate people within Korea to help. 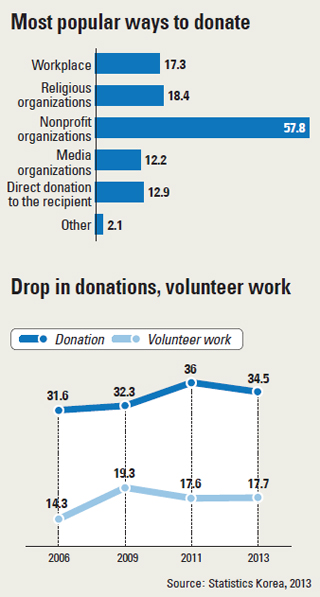 According to the latest report from Statistics Korea on charitable giving by citizens, a total sum of the country’s donations from individuals and corporations reached 11.84 trillion won ($10.74 billion) in 2013. The total is about 0.9 percent of the country’s gross domestic product. The report also shows that the highest number of “givers” in 2013 - 57.8 percent - donated cash through fund-raising NGOs.

Adversely, the same report showed that next to having no financial capacity to help others or having no interest in donating, many people who were willing to provide money said they don’t because they do not trust fundraising organizations.

The research also said that despite an increase in the number of givers compared to many years ago, the figure has been stagnant in recent years and has actually decreased from the rate in 2011. The percentage of donators fell from 36 percent in 2011 to 34.5 in 2013.

Although there are no studies about the recent donation stagnation in the country, many domestic fundraising NGOs assume it is because sponsors are losing faith as some charity organizations have not been transparent in their use of funds.

“I don’t have statistics on the decreasing amount of donations or the number of sponsors in Korea, but it is true that trust has been damaged,” said Hong Young-pyo, who has been collecting funds from individuals and corporations for Make-A-Wish Korea, which supports children with life-threatening illnesses.

“A series of scandals involving corruption in the Korean Red Cross or Community Chest of Korea in recent years has made sponsors in Korea lose faith in such organizations.”

Hong said that this spark has spread to other hard-working and transparent NGOs and has resulted in people pointing fingers at charity organizations who use too much money on operational expenses compared to the causes they support.

“But minimum operational costs are unavoidable,” said Hong. “That’s why NGOs now have to make endless efforts to gain the lost trust back from the sponsors, not just by being transparent and showing that there’s no corruption in the organization, but by explaining to sponsors that operational expenses are also indispensable.”

Under current regulations, all fundraising NGOs are obliged to disclose their annual financial reports, and many major organizations in Korea like World Vision, Child Fund, Save the children, Unicef, Compassion and Good Neighbors comply with the rule. Most NGOs show that more than 80 percent of their funds go directly to the causes they support.

Compassion Korea goes a step further than unveiling data on its website. It has been organizing so-called “vision trips” to communicate and show sponsors how their money is being spent and how it is changing the lives of children and their families.

However, sponsored children in Korea asked Compassion to come back so that the country could be a giver rather than a recipient of aid.

In 2003, Suh Jung-in, current president of Compassion, established a center in Korea. Although the vision trips began as soon as the organization’s launch in 2003, with Suh taking higher-level VIP sponsors and church pastors on a trip whenever he could, they became more systematized and active recently.

Not only are the trips one of the most effective marketing strategies to attract donations to the organization, they also allow sponsors to see how their money is being spent and what effects it brings to children living in poverty.

Bae Jae-wook traveled to the Philippines on the vision trip with Yi.

“I also went, not with a thought to help somebody or with a curiosity to see how the children are living but to feel and see something. But what I saw, touched, and smelled was totally different than the scenes I’ve seen through television screens,” said Bae.

“I often heard about corrupt NGOs on the news, so I didn’t have faith in them. But for me, the vision trip allowed me to gain back trust. I could really see and learn how efficiently the money is being spent,” he added.

Bae already sponsored a child through Compassion so did not think he would donate money on behalf of another, but he came back and began giving money for another girl he met during his trip.

“Even writing a letter every month seemed like a hassle, but after seeing and hearing how a simple letter from a sponsor changes lives, I decided to write to my sponsor children more often,” Bae said.

Peter Chung, a vision trip team leader at Compassion Korea said his organizations does not advertise because they want most of the money to go to the children.

“On the one hand, the best advertisement we could do is to show people our product. The best way for people to see the product would be to take them on a trip,” said Chung.

“[For Compassion vision trips], we don’t show participants a building project. We don’t go and show them a well that’s been dug. What we show on our vision trips are changed lives.”

Chung added that this is something that cannot be hidden.

“Participants see the children with their own eyes and how the sponsorship has changed their lives, and even their family’s lives. Children don’t lie. You can tell by their faces,” said Chung.

“Even the most skeptical sponsors are impacted. So for those who go in with a logical mindset, who want to see the programs inside and out, they are satisfied, but then people who love children and who have a heart for the poor, they are satisfied because they see that, wow, this is a program that’s making a long-term impact.”

The Compassion vision trip that Chung joined as a sponsor while working as a missionary in China led to Chung and his wife, who are Korean-Americans, immigrating to Korea to start working for Compassion.

“The vision trip I participated in as a sponsor changed the entire course of my career,” recalled Chung.

“I left China to work for Compassion because I saw how effective it was.”

As the vision trips not only transparently show participants the financial side of the organization, but also the priceless effects of the donations made by people, Chung said the organization is increasing its number of tours.

This year, Compassion Korea organized 20 trips that allow anyone - sponsors or non-sponsors, Christians or non-Christians - to join.

Next year, it is increasing the number to 29 and will head to countries ranging from the Philippines and Indonesia to Haiti and India.

“I have not met one single person who has regretted going on a trip ever,” said Chung.

“I have not met a single person who canceled their sponsorship because of the trip. If anything, we welcome skeptics. That’s because we don’t hide anything at Compassion. We show them all the finances we answer all their questions, because we know our system works.”