Chelsea and Arsenal bounce back after losses

Chelsea and Arsenal bounce back after losses 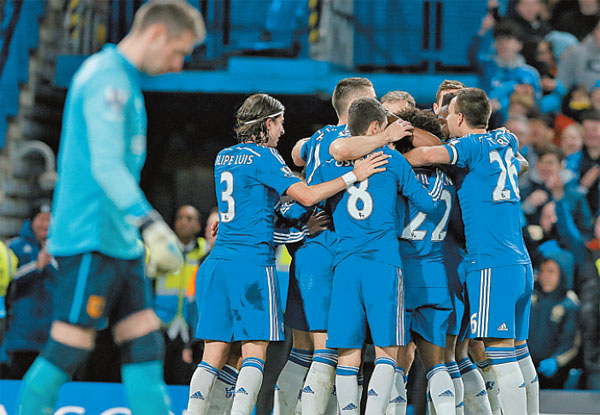 Chelsea’s Diego Costa is mobbed by his teammates after scoring during their English Premier League match against Hull in London on Saturday. [AP/NEWSIS]

Chelsea produced an instant response to its first loss in the English Premier League by beating Hull 2-0, and Arsenal also responded to a setback by overpowering Newcastle 4-1 on Saturday.

There was a fifth successive league win for Manchester City, with the champions edging past bottom-place Leicester 1-0 to stay three points behind leader Chelsea.

Eden Hazard headed in his eighth goal of the season for Chelsea in the seventh minute and played a one-two with Branislav Ivanovic before releasing Diego Costa to score in the 68th.

Between the goals, Chelsea gained a man advantage when Hull midfielder Tom Huddlestone was sent off on the hour, receiving a second booking for a studs-up challenge on Filipe Luis.

“As I was expecting, the bad moment didn’t continue,’’ Chelsea Manager Jose Mourinho said, referring to last weekend’s loss at Newcastle. “I was right when I had no fears about negatives. The team has game principles, and knows how they want to play.

“We have a clear identity in our game, we change sometimes because we need to, but we are a strong team.’’

City coped again without injured top scorer Sergio Aguero, with Frank Lampard slotting in a low cross from Samir Nasri to secure the win at Leicester. The 36-year-old midfielder could potentially extend his loan from sister club New York City FC, which makes its Major League Soccer (MLS) debut in March, until the end of the English season in May.

“Frank wants to stay, we want to keep him,’’ City Manager Manuel Pellegrini said. “Now we must resolve the problem with New York City and MLS.

“He is very important. One of the reasons why he played today was because he has scored for me. Frank has been very useful for us in this moment.’’

Scoring was no problem for Arsenal this day, with Olivier Giroud and Santi Cazorla both netting twice to banish the gloom following last weekend’s loss at Stoke.

Giroud headed in the opener in the 15th minute from Alexis Sanchez’s cross, and he also set up Cazorla’s first goal at the start of the second half. After Giroud clipped in another, Ayoze Perez pulled one back for Newcastle, but Cazorla marked his 30th birthday by completing a brace from the penalty spot in the 88th.

“We won in a convincing way,’’ Wenger said. “It was needed. The response was strong after the Stoke game.’’

While West Ham stayed fourth after drawing 1-1 with Sunderland, Southampton slumped to a fourth successive loss.