Chemical company looks ahead after rebranding

Chemical company looks ahead after rebranding 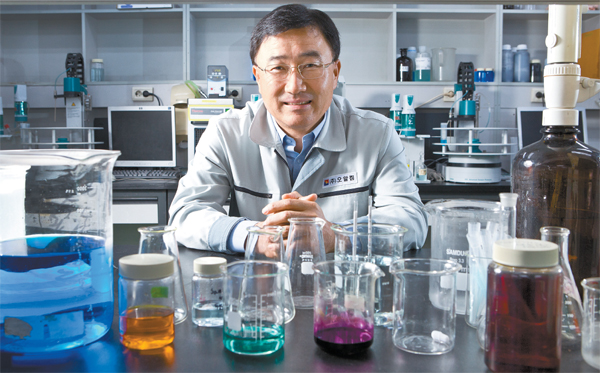 ORChem CEO Lee Jae-hyun poses with chemicals that the company is testing at its R&D Center in Siheung, Gyeonggi, on Nov. 27. ORChem’s central R&D Center was established in 2000. By Park Sang-moon

For the first time in 24 years, ORChem, a chemical venture based in Siheung, Gyeonggi, is changing its motto. Starting in 2015, its new slogan will be “Beloved Company and a Place Where Employees Want to Work.” 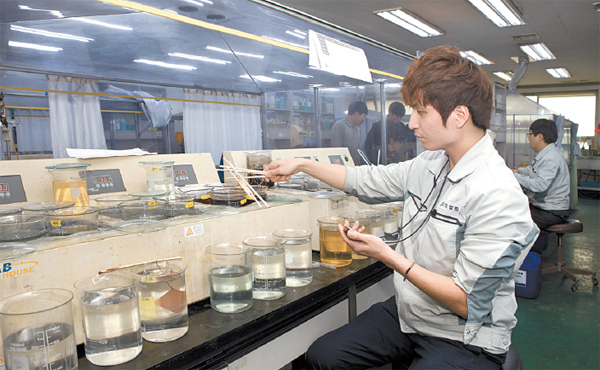 ORChem researchers work at a lab in Siheung, Gyeonggi. By Park Sang-moon

The previous slogan was “Harmony, Sincerity and Best.”

ORChem President and CEO Lee Jae-hyun said that the time has come for the company to refresh its image as its management philosophy develops.

“The company itself is human, after all,” said Lee.

Inside the building where Lee’s office is located, there are black-and-white photos of each company employee - not a just typical passport photo, but an active and natural one - and Lee said he always smiles and gains confidence when seeing these images.

“This is our great asset and a key that opens up our memory,” he said. “Employees also see these photos and remind themselves about their earlier days with vision and commitment.”

The reason Lee, who was born in Gwangyang, South Jeolla, wanted to start his own business was simple: to make money and get rich. After graduating from Kyungnam University in 1984, he started up a distribution company in 1986 with 5 million won (about $4,500) in Gumi, North Gyeongsang.

Lee recalls that his foray into chemical manufacturing was accidental. An acquaintance approached him to do business in PCB (printed circuit board) chemicals in 1991. As a person who majored in chemical engineering, the market was not unfamiliar to him.

“This person told me that I should be in the ‘big playground,’” said Lee. “The local PCB chemical market at the time still had a lot of room to grow, especially in the areas below Daejeon.”

Lee said that he has experienced no large difficulties since launching a business, although his family was always worried about failure. After changing the company name to ORChem in 2001 to refresh the brand, it did not stop growing and eventually listed on the Kosdaq in 2005.

However, Lee recalls that getting onto the stock market created a negative effect. The excitement of being the CEO of a stock-listed company was fleeting, and Lee said he soon felt stress and pressure from the shareholders.

“I admit that I was only prepared for listing the company into the stock the market but wasn’t ready for what company should do after that,” Lee said. “After being listed, there is a lot more work to do as you have to keep expanding sales for shareholders and have to do excessive marketing even if you want to do it. I was under a lot of stress.”

As ORChem got stuck in gear, the company was approached by Celltrion, a biopharmaceutical company, in a backdoor listing. In 2008, ORChem announced that it was merging with Celltrion, but in reality, it was Celltrion who bought ORChem. The chemical company later became just a business department under Celltrion.

For Lee, this was not a scenario he had planned for. He knew he still had the desire to grow the company, so in December 2008 he bought back the business from Celltrion and re-established it. It was a whole new ball game for him.

“It was like getting my son back,” said Lee. “It was a second rebirth and something had to be changed.”

From there, ORChem started to transform itself into a company that thinks about the future. Lee said he wanted the company to gain strength, not just expand in size. The CEO first started to get rid of debt and organized a business portfolio again.

“Before 2008, our revenue came from chemical distributions a lot, but I started to change the company into a chemical manufacturer,” he said. “I also tried to upgrade our customer lineup to be mainly based on conglomerates.”

But most importantly, what Lee focused on was boosting the company’s R&D capability. ORChem’s research center had already been established in 2000, but the sector was not competitive enough as there were slightly more than 10 researchers. Now, researchers account for nearly half of the company’s total employees.

The company has also doubled its R&D investments. These days, about five percent of its revenue is invested into its R&D sector. But Lee hit a road block again. Although the R&D sector was boosted and the company started to transform into a chemical manufacturer, it was still difficult to find a large customer for its new products. It called the Federation of Korean Industries’ Center for Large and Small Business Cooperation as a result.

“I thought that our problems could be found more easily if a third party examined the company,” Lee said. “What struck me was a comment from a consultant who pointed out that the company’s structure seems like it’s in the top five percent but lacks vision.”

With the help from FKI consultants, ORChem was able to supply its PCB chemical to LG Innotek and pave the way to expanding its revenue. But Lee said what is important is that the company’s reputation and product value is earning credentials from customers.

“For us, what we are focusing on is becoming the best in the business we are doing,” said Lee. “It’s not right to say that we are looking for other growth engines while our main business is not at world best.”

In terms of the overseas market, ORChem has already invested a lot in China, which is now the world’s largest PCB chemical market, as it has already established offices and factories there. Since its business relies on the electronics industry in which PCB is needed, Lee said that since Samsung Electronics is investing heavily in Vietnam, the company is also eyeing the Southeast Asia market these days.

But Lee acknowledges that ORChem is a supplier for the conglomerate and that he knows the company’s role.

“If our customer business goes well, we can do well,” he said. “For this year, amid a situation in which Samsung and LG has been busy fighting against Chinese companies, I think we did a pretty good job.”

While some small and medium enterprises have been complaining that big corporations are not that supportive and even rip off their earnings, Lee said he does not really think that way.

As its target for 2016, Lee said the company is aiming again to be listed on the stock market.

“We are still a company that follows a global chemical firm that has more than 30 years of technology and know-how and much larger R&D capabilities,” he said. “We will keep trying to become the best in the industry and one day the time will come where we can match these companies and perhaps lead the industry.”