The top suite goes for 8,820 Singapore dollars ($6,720) per night. However, the mostly upper-class patients who crowd the luxury hospital don’t seem to mind.

Compared to advanced countries where the health care industry is already well-developed, emerging nations have tremendous growth potential. Hospitals no longer target only patients in their countries.

Malaysia-based IHH Healthcare is expanding its network to major areas in Asia, like Novena, Singapore. The group focuses on China and India, taking full advantage of its geographical proximity and cultural similarity. In the Middle East, it started in Iraq and is pushing to expand in the United Arab Emirates. In the three regions, IHH is looking to build or renovate 19 hospitals and add about 4,000 inpatient beds to its current 6,000.

Undoubtedly, hospitals are eyeing the world’s biggest market: China, with a population of 1.38 billion. “In 10 years, half of the company’s revenue will be from China,” said an IHH official. Demand for health care in China has increased so much that the government decided to double the share of private hospitals from 10 percent to 20 percent over the next few years. “Those 10 percentage points are enough to surpass the size of the Korean health care industry,” said Kim Won-ho, a professor at Severance Hospital. 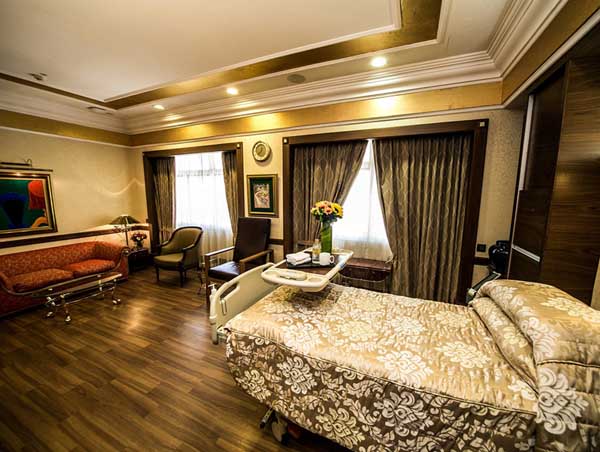 China is not a world leader in terms of health-care expenditures per capita, but that number is rising as with national income grows. “China spent $133 per capita on health care in 2007, and $321 in 2012,” said Ahn Geun-bae, Trade Policy Department head at the Korean International Trade Association, adding that breaks down to 23.2 percent per year.

China’s rising demand for medical services reflects the changing demographics of the country. In 2012, 8.67 percent of the population was aged 65 or older, surpassing the 7 percent threshold that defines an aging society. Rising income and greater health risks from environmental problems also are feeding demand for high-end medical services.

The number of patients with lifestyle-related health problems also is growing. Last year, there were 98.4 million people with diabetes, and the number is estimated to grow 140 million in 2035.

As China unlatches its gate, major hospitals around the world are scrambling to get in, with IHH Healthcare leading the race, followed by companies from the United States, Taiwan, Singapore and Hong Kong.

Chindex, a Nasdaq-listed medical equipment supplier, founded Hemujia Hospital, or United Family Hospital and Clinic, with the Chinese Academy of Medical Sciences. The joint venture hospital network has expanded to 17 clinics and one large hospital. This network is attracting China’s upper-class patients by offering initial examinations of an hour or more, compared to the usual 20 minutes, for about $200.

Meanwhile, 22 Taiwanese hospitals have entered the Chinese market. Chang Gung hospital, operated by Taiwan’s major conglomerate, Formosa, has 2,000 beds in Xiamen, Fujian Province, and 1,000 in Beijing. The hospital is rapidly expanding, thanks to language and cultural similarities.

Japan also is trying to get in on the action, with Prime Minister Shinzo Abe establishing the Headquarters for Healthcare and Medical Strategy Promotion in August 2013. One of the subsidiaries is a task force for the global reach of Japan’s medical technology and services to countries such as China, Russia and Myanmar.

So what about Korea?

Kim, of Severance Hospital, believes Korean hospitals are not fully prepared to penetrate the Chinese market.

Severance Hospital is pushing to build a hospital in Qingdao with Xinhua Jin Group, a private company in China. “We expect to build a general hospital with 1,000 beds, ultimately expanding to be a mammoth hospital with 3,000 beds,” Kim said. “But there are many mountains to get over and we have no experience when it comes to expanding abroad.”

But with its exceptional medical manpower and skills, Korea’s medical industry has the potential to become another world-leading giant like Samsung Electronics.

Although there was talk of allowing private hospitals during the Roh Moo-hyun administration, the idea was abandoned in the face of critics who said it would cause medical bills to skyrocket. Korean medical law limits the entities that could open health care facilities to providers such as doctors, the government, medical corporations established as per the medical law and nonprofit organizations.

The Park Geun-hye administration has identified health care as one of Korea’s promising industries, along with finance, education and tourism. However, there has been little progress during her administration. But the expansion of the Korean health care industry abroad could bring positive ripple effects.