Death of main suspect in leak ruled a suicide

Death of main suspect in leak ruled a suicide 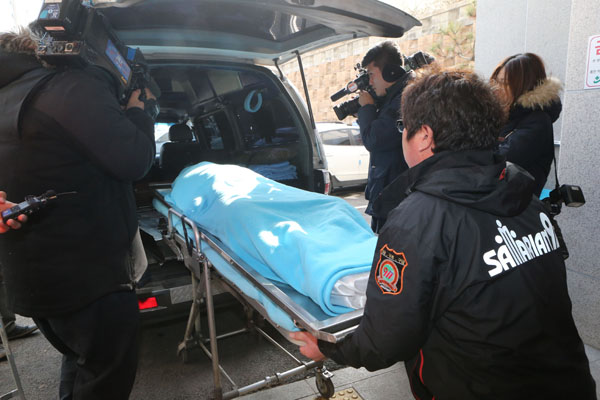 The body of a Seoul police officer, the main suspect in the case who was found dead, is taken from a hospital in Gyeonggi to the National Forensic Service on Sunday. By Shin In-seop

“In order to verify the truth of the report based on phone conversations based on the people involved in the report, we have summoned Lee,” the prosecution stated.

It is rare for a sitting presidential secretary to be summoned by the prosecution. Lee testified both as a key witness in the ongoing investigation, which has continued to gain momentum, and as a plaintiff in a lawsuit filed by eight presidential officials against the local Segye Ilbo.

The daily newspaper ran its first report on Nov. 28, citing a leaked Blue House document that detailed a behind-the-scenes power struggle at the presidential office that revolved around Chung Yoon-hoi, a shadowy former aide to President Park Geun-hye.

The leaked report claimed Chung, who currently holds no official government position, regularly met with 10 close aides to the president, including Lee and two other incumbent secretaries, to discuss state affairs and how their influence should be used.

The summon came a day after a 45-year-old Seoul police officer, one of the key suspects thought to have leaked the Blue House document, was discovered dead in an apparent suicide on Saturday afternoon, in an unexpected turn of the event.

His family claimed Sunday that the man, surnamed Choi, was driven to take his own life by the prosecution’s investigation and added that he was being framed.

Lieutenant Choi, employed at the Seoul Metropolitan Police Agency, was one of the key suspects alleged to have leaked the report, which was written up by Park Gwan-cheon, a police chief superintendent who worked at the Office of the Presidential Secretary for Civil Service Discipline at the Blue House until February.

According to police, Choi was found dead at around 2:30 p.m. on Saturday in his car, which was parked on the side of the road in Icheon, Gyeonggi, near his hometown.

An autopsy of the Choi’s body by the National Forensic Service in Wonju, Gangwon, concluded just a day after his death that he committed suicide and that “carbon monoxide poisoning” had been the cause. Police said Choi did not have other external injuries other than the cuts on his wrist.

Choi’s older brother, who last spoke with Choi on Friday, held a press conference at a Cathoilc cathedral in eastern Seoul Sunday afternoon and disclosed photocopied will Choi had left.

The will, handwritten on 14 pages of A4-size paper, apologized to his family and contained messages about his “grievances on being pinpointed as the culprit,” and that he “resented the newspaper for reporting without checking the facts.”

He also suggested in the will that his colleague at the Seoul Metropolitan Police Agency who is also suspected to have leaked the confidential internal report had been contacted by officials at the Blue House, who tried to convince him to admit to the charge.

Immediately after the press conference, the Blue House came up with a statement claiming that it never communicated with or attempted to persuade either of the two suspects.

He called the Segye Ilbo reporter who wrote the initial article in question “a pure soul” and said, “you must be going through rough times.”

He also outlined the difficulties of living as a public official, especially “in a powerless agency.”

“It is so difficult, I want to rest with ease and sleep a bit.”

Choi was arrested on Thursday. The prosecution suspected him and another police officer to have made hundreds of copies of the documents authored by Park Gwan-cheon, their superior. Choi, however, denied allegations that he had handed over copies of the document to the media and an employee of a subsidiary of Hanwha Group.

Choi told prosecutors during questioning that it was Park, not himself, who was responsible for distributing the documents to the press.

His family said they will set up a wake for Choi once the body is returned from the forensic service in Gangwon.

Meanwhile, President Park Geun-hye’s younger brother and the chairman of EG Group, Park Ji-man, was also notified by prosecutors to appear sometime next week for questioning. He had previously accused Chung of having hired someone to track his movements, and prosecutors said they plan to question Park Ji-man on these allegations as well.

The ruling Saenuri Party requested a thorough investigation into the leaked document scandal to reveal the truth, while the main opposition New Politics Alliance for Democracy (NPAD) has criticized how prosecutors have handled the investigation so far.

“Now, it has become difficult to even trust prosecutorial investigations,” NPAD spokesman Kim Sung-soo said in a briefing on Sunday. “We are paying particular attention to Lieutenant Choi’s words, as relayed by his bereaved family: ‘Who oversees the prosecutors? Ultimately, it all comes from the top, doesn’t it? It’s all about fitting together the puzzle.’”

Seo Young-kyo, the NPAD floor spokeswoman, said that the prosecution was “overreaching, which led to this unfortunate incident.”

She added, “There is speculation that, at the president’s word, the prosecution has already reached a conclusion and conducted a whirlwind, pressured investigation.”

Amid the political controversy, President Park Geun-hye’s approval rating dipped to 41 percent, the second lowest since her inauguration, according to a poll by Gallup Korea that was announced on Friday.

Park’s approval rating, which continued to drop for four consecutive weeks, has dropped three percentage points since the end of last month and seems directly linked to the outbreak of the document leak scandal two weeks ago.

This is her lowest rating since July, when controversy over Park’s prime ministerial appointments and her reshuffling of government posts following the Sewol ferry disaster in April put her approval rating at 40 percent, an all-time low since she took office in February 2013.