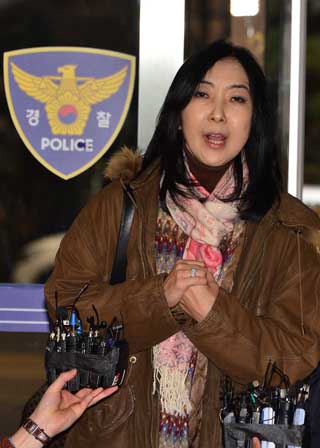 Shin Eun-mi addresses the press on Sunday after appearing at the Seoul Metropolitan Police Agency. She and Hwang Sun, the former deputy spokeswoman of the now-defunct Democratic Labor Party, were recently accused by conservative civic groups of making remarks sympathetic to North Korea during their talk shows. Shin initially rejected her summons on Thursday and the Ministry of Justice temporarily banned her from leaving the country. Shin will be questioned over the meaning behind her commentary. By Shin In-seop