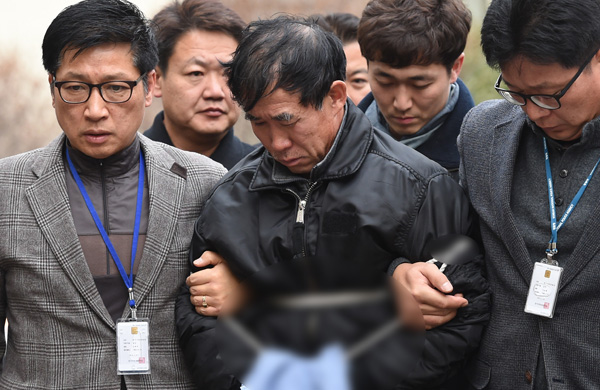 Park Chun-bong, who is suspected to have killed his ex-girlfriend and abandoned her mutilated body parts in four different locations, is escorted into the Suwon District Court on Sunday for his detention warrant hearing. [NEWSIS]

The suspect, Park Chun-bong, was questioned by the police overnight and escorted to the court on Sunday. The court ruled that Park could potentially destroy evidence and posed a flight risk.

Authorities disclosed the man’s name and age on Saturday following his reported admission. According to police, the 55-year-old is an illegal immigrant who entered Korea in 2008 with a working-visit visa under a fake name.

Park was bombarded by the press on Sunday as he was escorted out of the Western Suwon Police Precinct to attend his detention warrant hearing at the Suwon District Court.

When asked why he killed the victim and abandoned her mutilated body parts in different places, he answered, “I don’t remember. I feel sorry for the victim’s family.”

After the torso of a human body was discovered in a garbage bag on Dec. 5 near a mountain hiking trail in Suwon’s Paldal District, the police were stymied in their efforts to apprehend a suspect due to a lack of evidence.

Authorities were reportedly tipped off by Park’s landlord, who notified police that Park had disappeared for 15 days shortly after he signed a temporary lease to rent a room.

The suspect was arrested on Thursday at a motel in the same district. Park initially denied the accusations but submitted a confession on Saturday after the police presented their case.

The victim is alleged to be Park’s ex-girlfriend, who had lived with him for at least half a year. The suspect did not mention in detail how or why he allegedly the victim, but claimed that the death was an accident.

The National Forensic Service, which examined the body parts, said the woman is believed to have been choked to death. The police have so far found 11 bags with the victim’s body parts and internal organs. They have tentatively ruled out that she was killed in an organ-trafficking scheme.

The authorities continue to search for possible accomplices in their investigation. Park does not have a driver’s license or own a car, and police believe it would have been difficult for him to move across such distances with the bags without being noticed.

The woman’s dismembered body parts were discovered in four different places, including a mountain in neighboring Hwaseong, 8 kilometers (5 miles) away from where she is believed to have been mutilated.