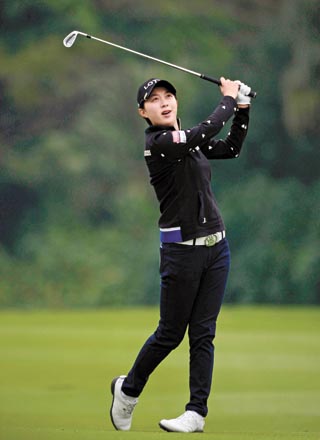 Kim Hyo-joo had her most successful year in 2014, standing out in both domestic and international tournaments.

As she enters her first full year in the LPGA, she is ranked ninth in the world, joining fellow Koreans Park In-bee (first) and Ryu So-yeon (seventh) in the Top 10.

In September, she won the Evian Championship, the LPGA Tour’s last major, after firing a tournament record 10-under 61 in the first round. At the age of 19 years and two months, she also became the youngest winner of an LPGA major, ahead of Park In-bee, who won the U.S. Women’s Open in 2008 at age 19 years and 11 months.

She won five KLPGA tournaments and swept four awards - player of the year, money leader, lowest average score and most wins - at the domestic league’s ceremony on Dec. 8.

“I still feel like a rookie, just like when I went professional,” said Kim at the award ceremony. “I will do my best in every match and go for Rookie of the Year.”

It was an unusual remark given that she rarely expresses her feelings and never mentions goals during the season.

“What I’m most excited about is the Evian Championship, because I want to win the tournament two consecutive times,” said Kim. “My next goal is to qualify for the 2016 Summer Olympics in Rio de Janeiro and top the world rankings.”

Kim plans to start preparing for her first year in the United States by having corrective eye surgery.

“I have really bad eyesight,” Kim explained. “Lenses and goggles have been very inconvenient, so I decided to have surgery before going to the United States.”

She plans to spend most of her time before next season on golf. “I would never stop working on my short game,” said Kim. “And I want to send my tee shots about 15 yards farther.”

Kim’s drives average about 250 yards, which is good for a female golfer. However, she thinks that adding a little extra distance will help her thrive in the LPGA and compete for Rookie of the Year honors with power-hitters like Kim Sei-young, Jang Ha-na and Baek Kyu-jung.

Kim also is known for her mental toughness. In critical, high-pressure moments, she typically remains relaxed and often jokes, baffling her competitors.

“Hyo-joo feels even more comfortable in front of a large gallery,” said Kim’s coach, Han Yeon-hee. “She enjoys large crowds, and she is an adventurer, who isn’t afraid to take a gamble, if necessary.”

Kim’s first tournament of 2015 will be the Coates Golf Championship on Jan. 26 in Ocala, Florida.