Man U on the way up with 3-0 Liverpool win

Man U on the way up with 3-0 Liverpool win 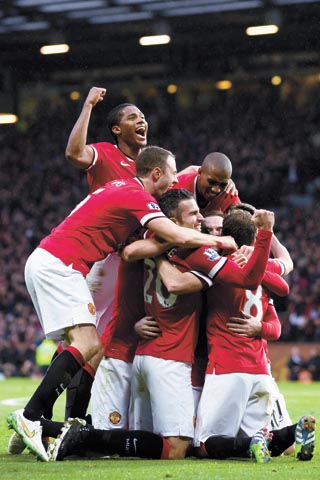 Goals by Wayne Rooney, Juan Mata and Robin van Persie sealed a sixth straight win for United, which has recovered from a disappointing start to the campaign to climb to third place and within eight points of leader Chelsea.

The scoreline was harsh on Liverpool, which was repeatedly denied by United goalkeeper David de Gea, but exposed the team’s inefficiency up front and underlined the transformation in fortunes of England’s two biggest clubs.

Eliminated from the Champions League on Tuesday, Liverpool dropped to 10th place in the Premier League after Tottenham’s 2-1 win at Swansea in Sunday’s other game.

Christian Eriksen drove in an 89th-minute winner for Spurs, who are seventh and have scored late goals for 2-1 victories in three of their last four away games.

While the title race is likely to come down to a straight fight between Chelsea and Manchester City, United cannot be discounted.

Louis van Gaal’s team still has plenty of room for improvement and has no European or English League Cup commitments to clog up its schedule this season. Liverpool was in a similar situation last season and almost won the league, taking a fast-finishing City to the final weekend.

“We have to see match by match,’’ Van Gaal said of United’s title chances. “Of course, winning now six matches in a row is fantastic but we have to improve our playing style still and I am saying that nearly every week.’’

Liverpool won the corresponding fixture 3-0 last season, one of a string setbacks that eventually cost United manager David Moyes his job. This time, it is Liverpool manager Brendan Rodgers under huge pressure after a heavy defeat in what remains a marquee fixture in English football.

Rooney, playing in central midfield, opened the scoring in the 12th minute before Mata headed in a second in the 40th minute, with the goal allowed even though the Spain playmaker was clearly offside from Van Persie’s flick-on.

De Gea had already produced two saves to deny Liverpool forward Raheem Sterling and the goalkeeper did even better in the second half to tip Mario Balotelli’s shot onto the bar, before Van Persie sealed victory in the 71st.

“For the goalkeeper to get man of the match tells you everything,’’ Rodgers said. “We created more chances today than for five or six games.’’

Rodgers is tinkering with his team in a bid to find the winning formula, but it is proving elusive. Goalkeeper Simon Mignolet was dropped, the formation was changed to 3-4-3 and there was no genuine striker in the starting lineup.

There was more fluidity and pace in the approach play but Liverpool badly needs top striker Daniel Sturridge back fit and its defense looks brittle.

“It epitomized what our season has been,’’ Rodgers said. “We have nowhere near enough goals in the team and that has put pressure on.’’

Tottenham won against the run of play after scoring early and late at Liberty Stadium.

Harry Kane continued his impressive form by scoring in the fourth minute, only for Wilfried Bony to equalize in the 48th for his 20th goal of 2014.

Eriksen fired a right-foot shot into the bottom left corner after Swansea failed to clear its lines, allowing Spurs to move above Liverpool, Swansea and Newcastle in the standings.

“We are a team which doesn’t settle for a point,’’ said Eriksen, whose late goal sank Hull, 2-1, last month.