Explorer thrives as a family vehicle

Explorer thrives as a family vehicle 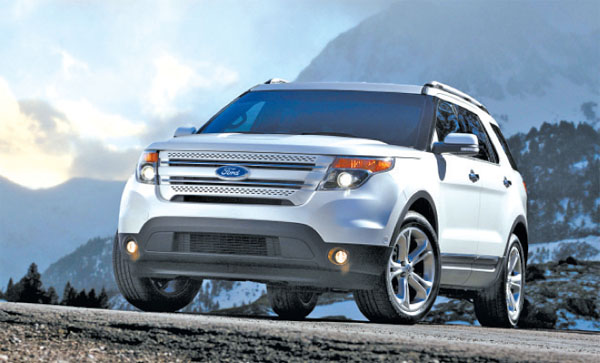 Ford Explorer. Provided by the company

Office worker Lee Hang-seok, 38, recently gave up his old sedan to switch to a more powerful Ford Explorer. Since he likes sedans, he considered purchasing a new one with a more stylish design and better riding quality, but as a married man raising three children, he decided to choose a vehicle that has more useful features for him. The Ford Explorer has a large interior space, safety, a masculine design, good driving performance and an affordable price.

The Explorer is a typical American muscle SUV that was first produced in 1991 and its fifth-generation model, with a 3.5-liter Ti-VCT V6 or 2.0-liter Eco-boost, is sold in Korea. The fuel economy of the V6 model, at 7.7 kilometers per liter (11 miles per gallon), was improved by 20 percent from its predecessor, while the eco-boost model’s fuel efficiency of 8.9 kilometers per liter was improved by 30 percent.

For Lee, it was important that his new car could carry all of his family’s camping equipment.

The explorer perfectly met that demand with 595 liters (21 cubic feet) of cargo space even when all seven seats are occupied.

Its price and features have kept the Explorer competitive among imported vehicles, as many other brands have been focusing on diesel models in recent years. Ford sold 2,154 Explorers last year and has sold 300 more units this year as of the end of October. It was the only gasoline-engine car on the list of top 10 imports by sales in October, selling 401 units.

“Large-size SUVs are considered family cars because they can be used in various ways,” said a spokesman of Ford Korea’s sales department. “Since the Explorer is practical and is being offered in a good price range, it is popular among men in their 30s and 40s.”

Ford said that although Korean consumers have favored diesel cars over the past few years, recent data showed that sales of gas engine cars have been gradually increasing. According to the Korea Automobile Importers and Distributors Association, the market share of imported gasoline vehicles in Korea improved from 26.8 percent in August to 28.3 percent in October.