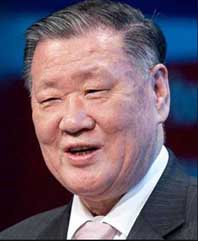 In a meeting with about 60 heads of overseas branch offices of Hyundai Motor and Kia Motors at the group’s headquarters in Yangjae-dong, southern Seoul, Chung discussed the companies’ performance this year and shared sales strategies for next year. The chairman complimented the directors on sales, which are expected to hit more than 8 million cars combined this year, about 140,000 more than its goal.

“The 8 million milestone is our new beginning,” Chung was quoted as saying. “The auto industry will have a tough year next year due to slow economic growth, the weak Japanese yen and low oil price. But next year will be an important one since many carmakers will introduce environmentally-friendly cars and we should be prepared for this competition since our goal is also to be one of leading automakers in that business.”

Sales of environmentally friendly vehicles next year are predicted to be 2.4 million, an increase of 22.2 percent from this year, the company said.

Hyundai will introduce a plug-in hybrid Sonata sedan in Korea and the United States in 2015, and Kia will also start selling a new K5 hybrid to increase their market share.