IT giants looking to virtual reality

IT giants looking to virtual reality 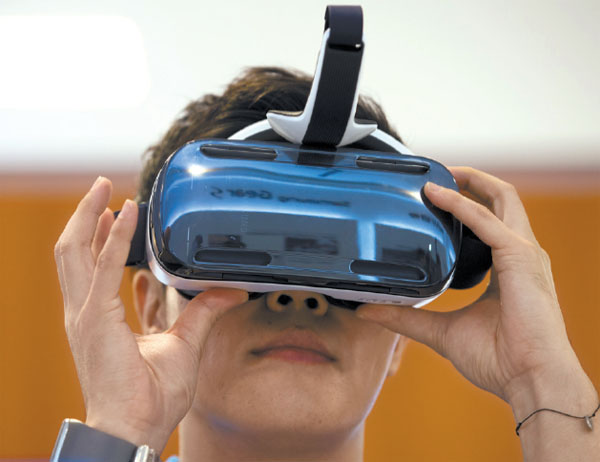 Global IT giants such as Samsung, Apple and Google are eyeing moves into virtual reality, as the simulator devices emerge as a new growth driver for the next generation of IT.

Virtual reality with three-dimensional images and realistic sounds and motion recognition through glasses or helmets, is now only used in theme parks or gaming arcades.

But major IT companies are looking to become pioneers in virtual reality, hoping to expand it to be used in education, games, health care, shopping, defense and manufacturing.

Samsung Electronics launched its virtual reality device Gear VR in the United States on Dec. 9 for $199, and it sold out in a day. Samsung plans to launch the product in Korea next month.

Gear VR is a smartphone display that makes the 2D screen of a phone 3D so that users can enjoy a 360-degree view of virtual reality. Samsung cooperated with Oculus, a subsidiary of Facebook, to develop the Gear VR.

Besides being used for entertainment, the Gear VR can also be used for body scanning for health care purposes and to simulate driving a car or flying a plane.

For its part, Samsung’s biggest rival Apple is hiring software engineers familiar with virtual reality companies such as Oculus Rift and Leap Motion. The company recently posted a handful of job listing for engineers who will work on developing user interface and applications for virtual reality.

According to foreign media reports, Apple is developing a prototype virtual reality device and will test it soon. Whether Apple’s latest development is a form of software or hardware is unknown.

Google, which has developed Google Glass is continuing its investment in virtual reality. The company has recently invested $542 million in Magic Leap, a virtual reality technology firm with capital ventures such as Qualcomm Ventures and Vulcan Capital.

Magic Leap is creating realistic 3D imaging technology that can project the image into the users’ eyes by tracking their pupils.

“Because virtual reality could enable the IT companies to expand their businesses into the medical, gaming and video industries, global companies are accelerating developments,” said a Samsung spokesman.

Korean start-ups are also developing virtual reality technology. Goggle Tech, which owns patents for virtual simulators in Korea and overseas, launched the Go4D VR Solution. The device is a head mounted display on which users can watch 3D images on a 100-inch wide screen.