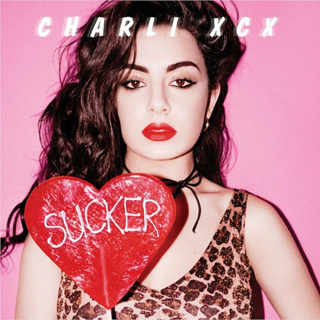 
Charli XCX, the British artist with a penchant for teenage churlishness, knows a thing or two about warfare. With her second major label album, “Sucker,’’ she throws a smoke grenade of rock-pop digestibles and runs for cover while the listeners stumble around intoxicated and confused.

Having made a name for herself in the last 18 months on collaborations such as Icona Pop’s “I Love It’’ and Iggy Azalea’s “Fancy,’’ the 22-year-old is one more weird and wonderful song short of becoming the new “It’’ artist.

First single “Boom Clap’’- also on the soundtrack of the film “The Fault in Our Stars’’ - is an electrifying synth with a punchy hook. The dark sound of “Break the Rules’’ gives her an edge mitigated by the somewhat childish chant, “I don’t wanna go to school/ I just wanna break the rules.’’ The song, however, works as a potent instigator to party. The title track is another cheeky rock invective thrown at all those boring adults who don’t know how to have fun. The sound on “Sucker’’ borrows riffs heavily from mid-’90s alternative rock bands like Elastica, especially on tracks like “Gold Coins,’’ “Hanging Around’’ and “Breaking Up.’’ AP