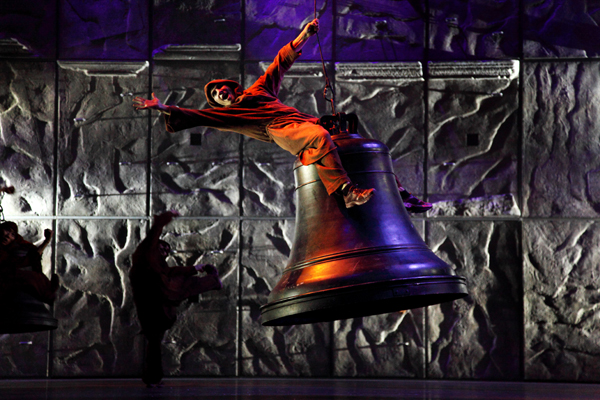 The original cast from the French musical “Notre Dame de Paris” has kicked off its world tour in Korea. Provided by the organizer

The musical “Notre Dame de Paris” has been staged in Korea frequently. But it’s the first time in nine years for the original to come here from Paris.

The French musical kicked off its yearlong world tour in Korea on Saturday in Gyeongju, North Gyeongsang. After stopping in Daegu, it will arrive at the Sejong Center for the Performing Arts in central Seoul on Jan. 15.

“It will surprise many ‘Notre Dame’ fans that the musical’s international voyage started from Korea,” said Kim Yong-gwan, CEO of Mast Entertainment, the Korean producer.

“Since this is the first time in nine years, it’s an honor for Korean musical fans to be the first ones to enjoy the musical.”

The show, based on Victor Hugo’s tale of the same name, debuted in 1998 in Paris. Since then, it has taken Europe by storm. The English version premiered in Las Vegas in 2000 and came to Korea in 2012.

Musical aficionados here will be more familiar with watching Korean or English musicals when they come with an “original” tag. For those who will be unsure of what it’s like to watch the musical in French, Korean producer Kim assured that “the beauty of the songs in the Notre Dame de Paris is known to be maximized when sung in French.”

Riccardo Cocciante, the musical’s original composer, said “although all languages have their own beauty, the musical shows off its perfect harmony when the music in the musical is combined with French lyrics in which the original music was written for.”

Cocciante also stressed that music is a language in itself.

“Even if you may not understand every word in a song, it expresses so much,” the composer said. “Like when we listen to great songs of the Beatles. We may not understand the lyrics word by word, but we are amazed by it. Classical music also doesn’t have lyrics but we are touched by it. That, I believe, is language.”

Cocciante added that he wanted the cast’s voices to shine through in his show.

“When composing for this musical, I paid attention not to deliver so many words in the lyrics so that the audience can fully enjoy the voices of the actors and actresses.”

Although the musical will not differ much from the original, Gilles Maheu, the musican’s first director, said its “presenting method will differ a little bit depending on the cultural background of where the show will be staged.”

Matt Laurent, who played lead character Quasimodo for more than 950 shows, is also joining the inaugural team for the world tour.

Laurent, who has a large fan base in Korea, said he could never forget the time he was welcomed by Korean fans in 2005.

“They greeted me in French and really welcomed the whole team enthusiastically,” said Laurent.

The actor also played Quasimodo in 2012 in the English version in Korea.