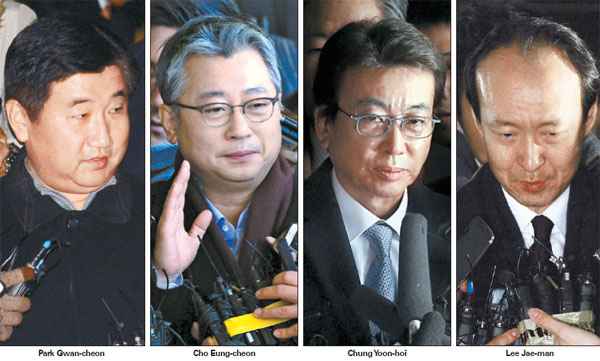 It all began on Nov. 28 with a story in a local newspaper about a document that had been leaked from Korea’s presidential office. From there, the scandal started to rapidly unfold.

The leaked report, entitled “Current activity of the VIP’s confidant [Chung Yoon-hoi] and rumors about the replacement of the Blue House chief of staff,” which was reported by the Segye Ilbo, appeared to confirm long-standing suspicions by critics of the conservative Park Geun-hye government over the hushed way in which she has made her policy decisions.

The article quoted documents claiming that Chung Yoon-hoi, Park’s former aide, had been meddling in state affairs by giving instructions to the president’s secretaries, despite the fact that he holds no official position within the administration, and seemed to explain the reasons why so many of the government’s personnel appointments had gone awry over the past two years.

The report pointed to Chung as a clandestine figure, pulling strings behind the scenes, who met regularly with a circle of aides to President Park to influence political affairs.

The leaked documents also described three of Park’s aides as the “three doorknobs,” shining a light on their influence in the administration.

In the report, Chung was alleged to have ordered the secretaries to circulate rumors stating that the president’s chief of staff, Kim Ki-choon, would step down in an effort to plant the seeds for his ouster.

The leak immediately set off shockwaves in and outside the Blue House.

If the accusations turn out to be true, it would imply that the Blue House has relied on a single little-known intermediary for its personnel appointments and policy decisions, and the fact that the report was drawn up in the Office of the Presidential Secretary for Civil Service Discipline has only added to its credibility.

Since its leak, the opposition has interpreted the report as the perfect way to explain why Korea’s president has repeatedly failed to make successful personnel appointments.

Not long after her inauguration in February 2013, Park came under fire for a series of botched cabinet appointments.

Most notable is the case involving former Blue House spokesman Yoon Chang-jung, who embarrassed the administration after he was accused of having sexually assaulted an intern who accompanied him to Washington last year on a presidential visit.

Over the past two years, more than five ministerial nominees have failed to pass their confirmation hearings because of alleged irregularities, and the Blue House’s repeated appointment missteps have upped speculation that Park may have been influenced by an unofficial advisory panel with Chung at its center.

“Since its inauguration, the Park administration made a series of curious appointment decisions, and the list includes spokesperson Yoon Chang-jung, prime ministerial nominees Ahn Dae-hee and Moon Chang-keuk, and so on. These repeated mistakes undermined public trust in the administration and led to the belief that some of its bungled decisions were related to a shadowy group behind the scenes,” said Yoon Hee-woong, the director of the public opinion analysis team at Min Consulting, a political consulting group.

The scandal ignited by the Nov. 28 article sparked a series of back-and-forth rebuttals between current and former presidential officials, which is still ongoing and has left the public with the impression that the Blue House is mired in serious factional strife.

The Blue House has denied allegations about a secret circle, saying the civil office’s once-classified report was nothing more than a collection of groundless rumors. It also made clear its frustration with the Segye Ilbo and its reporting.

President Park accused the paper of spreading the false information without checking the facts, despite the fact that the newspaper’s article was entirely based on the leaked Blue House document.

A day after the Blue House’s first response, the JoongAng Ilbo on Dec. 1 published an interview with Chung, who by then was being frantically sought by the media.

“Over the past seven years that I have lived a life outside politics, I have never had contact with those three aides,” Chung said in an interview, referencing Lee Jae-man, the presidential secretary for administrative affairs, as well as Leong Ho-seong and Ahn Bong-geun, personal secretaries to the president, referenced in the report as the “three doorknobs.”

Chung, who was Park’s former chief of staff between 1998 and 2004, when she was a lawmaker, added that he was willing to go to jail if he was found to have committed any wrongdoing. He also argued that the leaked document was completely fabricated.

However, a new twist emerged a day later that directly contradicted the presidential office’s claim. In an interview with the Chosun Ilbo, Cho Eung-cheon, the former secretary for civil service discipline, contended that more than 60 percent of what was stated in the document was true, delivering a direct blow to his former boss.

As well as countering President Park’s claim, he also criticized the Blue House’s personnel management for being undisciplined and attributed the problem to Chung and the three presidential secretaries.

Cho, a former prosecutor who directed a subordinate to draft the report on Chung, also claimed he was forced to quit his Blue House job on April 15 - a possible retaliation for his refusal to accept phone calls from Chung, who likely knew about the internal Blue House report detailing his activities.

“I tried to sincerely fulfil my duty as a Blue House watchdog for President Park but was severely constrained,” he told the newspaper.

A deeper look at the unfolding series of accusations and rebuttals reveals what appears to be an internal struggle between groups close to Chung and those close to Park Ji-man, the younger brother of President Park.

The younger Park was reported to hold a grudge against Chung, to the point that he accused the former aide of hiring a man last year to spy on him, an allegation that was reported by the weekly Sisa Journal in March. Upset over the report, Chung filed a defamation suit against the publication and has maintained that he never tracked the president’s family.

Political observers interpret the ongoing scandal as a battle between the two groups, represented by both men. Some speculate the leak of the classified report was part of a plan by a group of Park Ji-man’s associates to damage Chung’s reputation by exposing him as an interloper in the Blue House’s decision-making process.

Cho, the former civil service secretary, is known to be a close associate of the president’s younger brother. Their relationship dates back to 1993, when Cho was a prosecutor and tasked with handling Park Ji-man’s drug abuse case, and some observers believe the reason why Cho was able to directly refute the Blue House on the scandal is because he was backed by the president’s brother.

The prosecutors summoned Chung and Cho for questioning last week. Chung denied allegations that he interfered in national affairs and demanded a cross examination with Park Ji-man to clear up any misconceptions that he may have spied on him.

Cho, on the other hand, denied he was responsible for the leak.

While branding the content in the leaked report as nothing more than groundless rumors, President Park vowed to punish those who outed classified presidential records, saying such an act was tantamount to disturbing national security.

She said during a luncheon with ruling Saenuri Party lawmakers on Dec. 7 that Chung’s service with her had ended a long time ago and that she had not reached out to him since. On her brother, she added that she had never invited him to the Blue House, disputing speculations of a tug of war between Park Ji-man and her former aide.

But whatever the truth may be, the ongoing scandal is bound to leave a lasting scar on the administration, now going into its third year, with its push for major reforms undermined by some degree, if not by and large, experts say.

“The Blue House will be able to contain the crisis in the end because it is only in its second year, which means it still has a firm grip on all branches of power,” said Yoon, of Min Consulting.

“Nevertheless, it will leave the administration undermined and weaken its support base by some degree. … It could have a lasting effect on its ability to achieve its policy objectives should it fail to wrap up the scandal in a transparent manner,” he said.

Making things more complicated for the scandal-mired Blue House is that the public opinion is largely doubtful about its protests over the leaked report.

In an opinion poll surveying 1,000 adults nationwide, which was conducted on Wednesday and Thursday by the JoongAng Ilbo, 50.2 percent of respondents said they believe the content in the leaked document to be true, while 23.9 percent said the accusations were false. A quarter, 25.9 percent, said they have no opinion.

The margin of error was plus or minus 3.1 percentage points.