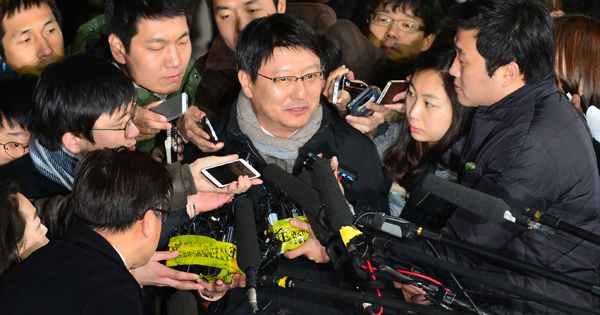 Park Ji-man, center, the younger brother of President Park Geun-hye, appears at the Seoul Central District Prosecutors’ Office on Monday to be questioned over the leak of an internal Blue House document that sparked a political scandal over backroom power dealing. [NEWSIS]

Park Ji-man, the younger brother of President Park Geun-hye, appeared before prosecutors on Monday to be questioned over the leak of an internal Blue House document that sparked the political scandal surrounding one of the president’s former top aides alleged to have secretly exercised power under the current administration.

“I will tell the facts that I know,” he told reporters before entering the Seoul Central District Prosecutors’ Office in southern Seoul at 2:30 p.m. with his lawyer. He did not respond to questions over whether he believes Chung Yoon-hoi, 59, the president’s chief of staff from 1998 until 2004 when she was a lawmaker, hired someone to track him.

What Park told prosecutors was not available at press time. The investigation continued until late into the night. Monday happened to be Park’s 56th birthday.

The chairman of EG Group, an electronic materials producer, Park could have opted to send in a legal representative or a written submission.

However, sources say he made up his mind to confront the situation head-on for his sister’s sake, despite the fact that President Park has visibly been trying to distance herself from her family, mindful of the problems they could cause.

Aside from Park Ji-man, who was a renowned drug addict until the early 2000s, the president has one younger sister, Geun-ryung. Both siblings have maintained low profiles since she was inaugurated in February 2013.

Following the scandal, which was first reported in an exclusive report by the local Segye Ilbo on Nov. 28, President Park’s approval ratings have plunged below 40 percent - the lowest since she took office.

Quoting a leaked internal Blue House report, the newspaper article stated that Chung had led a secret 10-member faction consisting of the president’s key secretaries in a bid to influence state affairs. He is also accused of serving as a power broker in backroom string-pulling operations at the Blue House.

“[Park Ji-man] said he would rather face prosecutors on his own to contribute to mitigating the mayhem over state affairs to slightest degree, even if him doing so makes headlines,” a source close to him told the JoongAng Ilbo. “He wants to see various allegations resolved during questioning so that the president is no longer burdened.”

Prosecutors were poised to grill Park over how he obtained the more than 100-page internal report, which was later revealed to have mentioned his wife, lawyer Seo Hyang-hee, in multiple instances.

The report was created by the Office of the Presidential Secretary for Civil Service Discipline. Park was also questioned over whether he has a personal relationship with a seven-member group of government officials led by Cho Eung-cheon, the former presidential secretary for civil service discipline who ordered the report to be drafted.

From the beginning of the Park administration, the rumors about a bitter power struggle between Chung and Park Ji-man were extensive. But a March article by the Sisa Journal, a weekly magazine, about an inconspicuous feud between Chung and President Park’s brother last year triggered the worst political scandal of the Park administration and spotlighted Chung, who was once an obscure figure.

The exclusive story alleged that Chung had hired someone to shadow Park in late 2013. Chung later filed a suit against the magazine’s reporters, calling the report groundless. Park has so far refused to confirm rumors that he caught a motorcycle driver who was tailing him and persuaded him to write a sworn statement that Chung paid him to do so.

Chung has maintained his innocence and continued to deny accusations about behind-the-scenes influence-peddling, or that he had any communication with the president’s secretaries. On Wednesday, the former aide also demanded during questioning that he and Park be cross-examined.

“I think whoever started this ghastly fire play and who danced along will be revealed,” he told reporters after the probe, essentially implicating Park as the culprit.

Park’s questioning is more than likely to determine the direction of the high-profile scandal, which has already led to the death of one suspect in the leak.

Park is the last among a series of people involved in the case to be grilled by prosecutors.

Between Dec. 4 and Dec. 14, investigators have summoned senior police officer Park Gwan-cheon, who wrote up the report while being seconded to the Office of the Presidential Secretary for Civil Service Discipline; Cho Eung-cheon, Park Gwan-cheon’s boss who authorized the document to be written; Chung Yoon-hoi, the president’s former aide; two mid-level police officers at the Seoul Metropolitan Police Agency; and Lee Jae-man, the presidential secretary for administrative affairs alleged to be in Chung’s circle.

Lee, who was questioned for more than 12 hours on Sunday, said that the content in the Blue House report was “all false” and that Chung had never interfered in state affairs.

Presently, Park Gwan-cheon, Cho and both police officers at the intelligence bureau of the Seoul Metropolitan Police Agency - only identified by their surnames Choi and Han - are all suspects in the leak, which has continued to puzzle analysts.

Making the situation worse is that Choi, one of the two policemen, committed suicide on Saturday, leaving behind a 14-page will. The two officers were charged with photocopying and circulating the confidential report, dated Jan. 6, that was authored by Park Gwan-cheon. Prosecutors earlier requested an arrest warrant for both, though the court has dismissed the application.

Eight photocopied pages of Choi’s handwritten suicide note disclosed by his brother to the media on Sunday suggested that the Blue House had earlier coerced officer Han into making a false confession by proposing favorable arrangements. During the investigation to determine the warrant’s validity last Wednesday, Choi claimed - as in his will - that he was told by a colleague that a police officer currently seconded to the Civil Affairs Secretary Office had offered to ease the gravity of his crime in exchange for Choi providing a false admission.

Before Choi took his own life, the Seoul Central District Prosecutors’ Office planned to re-summon the two officers and review whether it should re-apply for arrest warrants for them following a corroborative investigation.