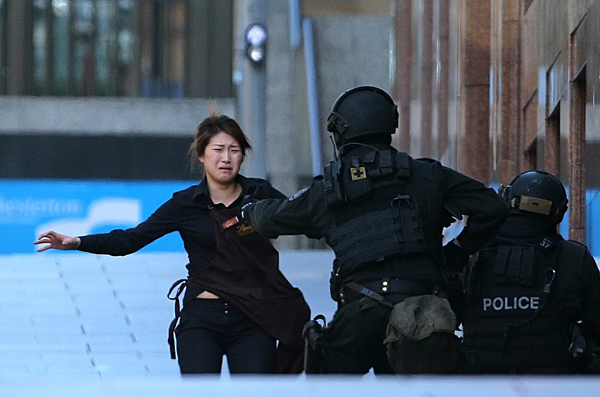 An armed tactical response police officer grabs a hostage on Monday as she flees from a cafe under siege at Martin Place in the central business district of Sydney. [AP/NEWSIS]

A Korean-Australian college student was confirmed to be one of a few who managed to escape after dozens of people were taken hostage on Monday in a chocolate shop in Sydney by an armed gunman who is suspected of having links to the Islamic State (ISIS) militant group.

An unknown number of people were held by at least one unidentified gunman at the Lindt Chocolate Cafe at Martin Place, a central business and shopping plaza in the heart of the city at about 9:44 a.m. local time.

Hundreds of police officials sealed off the area and evacuated nearby offices and stores, shut down roads and closed off traffic around the business and shopping district, which hosts the state parliament house, the U.S. Consulate General and the headquarters of two of Australia’s largest banks.

The Korean Foreign Ministry afterward confirmed that a young woman in her 20s surnamed Bae, an employee at the shop, to be one of the hostages and said that it was “in the process of confirming if there are any other Koreans.”

Live footage of the scene showed hostages, including young women, with their palms pressed up against the glass. They may have been used as a shield to protect the attacker inside.

Several people inside the store, including store employees, lifted up a black flag with white Arabic writing against the window, initially leading to speculation that the siege was linked to ISIS.

Observers pointed out that the flag is similar, but not identical to, the one used by ISIS. The flag was identified as a Shahada flag, representing a general expression of Islamic faith.

The Arabic letters could be translated to: “There is no god but God, and Mohammed is the prophet of God.”

These types of religiously significant flags have been adopted by jihadist groups in recent years.

Bae, 24, was identified to be one of at least five hostages who fled the shop as of Monday afternoon.

After six hours of being held hostage, at 3:40 p.m., three hostages escaped out of the shop and into the protection of heavily armed police officials. They were all male, including one staff member, who ran out from the cafe’s delivery entrance.

Later, two Asian women, who appeared to be cafe employees by their brown uniform aprons, escaped at around 5 p.m. out of another exit of the building.

According to video footage from the scene, Bae, in tears and still in her brown Lindt uniform, dashed out of the shop and into the custody of heavily armed officials guarding the street.

That morning, a woman reportedly saw a suspicious-looking man carrying a blue sports bag walk into the chocolate cafe and immediately reported him to the police as the hostage situation unfolded. Visual captures later showed at least one gunman through the windows - a middle-aged man with a beard who appeared to be wearing a traditional black Islamic cap. He could possibly be wearing an explosive suicide belt.

Police officials confirmed that police negotiators have had contact with the attacker but that further details could not be revealed for operational reasons. Authorities did not confirm the exact number of people held hostage but said there were less than 30 left in the shop. So far, none have any known injuries.

New South Wales Police Commissioner Andrew Scipione told the media, “We have not yet confirmed this is a terrorism-related event.”

Australian Prime Minister Tony Abbott said it was not yet clear who was behind the incident but that it could be “politically motivated.”