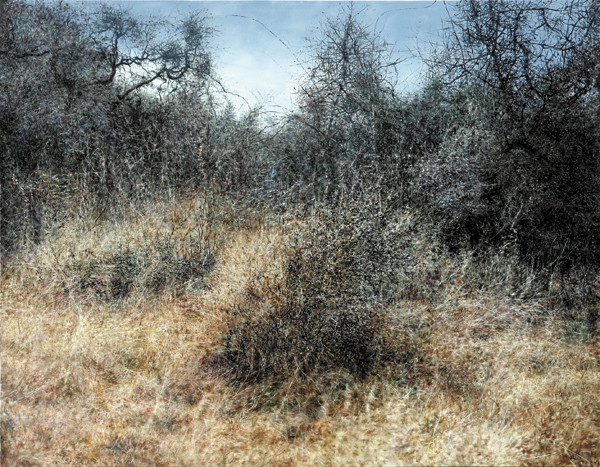 Lee Kwang-ho’s oil painting “Untitled 2356”(2014) is part of the artist’s solo show at Kukje Gallery in central Seoul. Due to his unique brush strokes and the skill of scratching the canvas with a needle, the bushes appear raised, as if they are about to touch the viewer. Provided by the gallery

Lee Kwang-ho’s latest landscape paintings, though realistic and created in oil on canvas, differ from similar art in the Western classical style.

The paintings, which are currently on display at Kukje Gallery in central Seoul, depict bushes seen in the most desolate sites of Korea’s Jeju Island during winter.

Due to Lee’s unique brush strokes and his skill of scratching the canvas with a needle, the bushes appear raised, as if they could be touched by the viewer. Those who approach the paintings almost feel as though they are stepping through the rustling shrubbery.

This quality contrasts with the characteristics of the classical landscape paintings and photos, which give viewers the illusion of peering at the vista through a window.

“I tried to visualize the experiences with my perception, especially sense of touch, which I had when I walked in the bushes,” the artist said in a press preview last week.

The exhibition, at the K1 building of Kukje, features 21 paintings by the 47-year-old. His pieces showing the bushes during the day are on the first floor, while those depicting them at night are on the second.