Workers laid off as belts tighten

Workers laid off as belts tighten 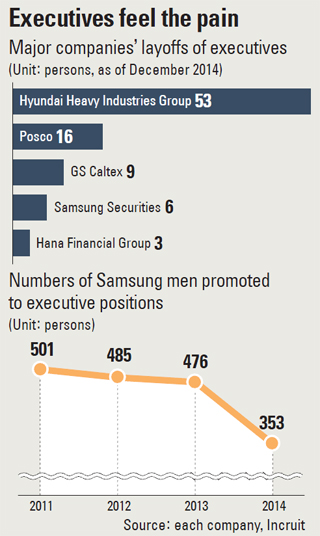 The 63 Building in Yeouido, southwestern Seoul, has a cold, cautious atmosphere these days. The restaurants on the top and basement floors are festive with year-end parties, but the floors in between, where people pursue their careers, are far less gay.

One of Seoul’s signature buildings is owned by Hanwha Life Insurance, a company that is planning layoffs of 700 employees by the end of the month. The insurer already let go 300 people in the first half of this year - which means the company is losing more than 20 percent of its 4,738 employees in the span of a year.

“If I don’t volunteer to resign, the company may send me over to one of those small insurance sales branches in a random part of the country,” said a 46-year-old deputy director who asked not to be named. He has worked at Hanwha Life for the past 19 years. “Under current rules, the company doesn’t have to give voluntary retirement pay if I retire after being sent to one of those regional sales branches. So, I’m seriously pondering resigning before the year’s end.”

Workers at Korean chaebol, the so-called “salarymen,” are facing an end of the year holiday season that is pretty gloomy, mainly due to threats of corporate restructurings and mass dismissals. 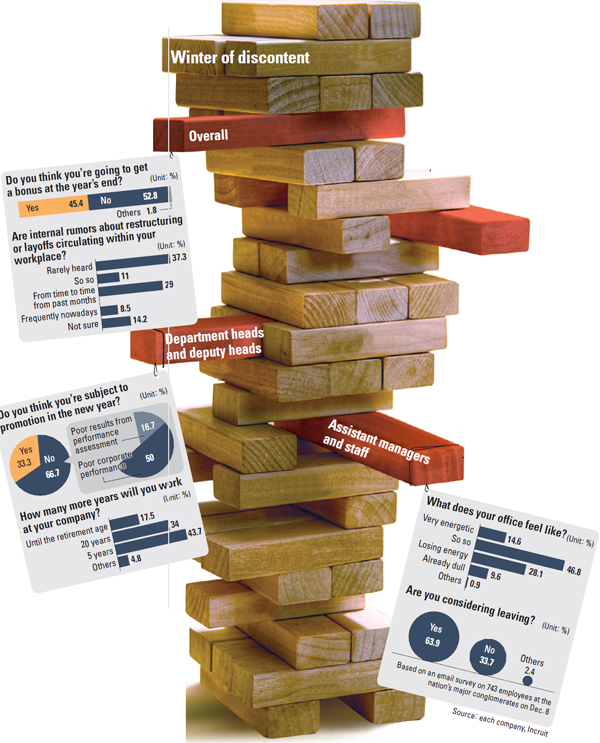 According to a JoongAng Ilbo investigation of business reports on the third quarter of this year prepared by Korea’s top 300 listed companies in terms of revenue, more than 27,800 workers left their companies this year. This means that every day, 102 workers left - or were forced to leave - jobs in the nation’s most successful and admired companies. Even more workers were let go since the business plans were written, which means that there are fewer and fewer occupied desks at what used to be known as “God’s workplaces.”

Few industries are escaping the crunch. Doosan Heavy Industries is accepting voluntary retirements from employees. All 450 workers aged 52 and older are worried about getting the push. There is internal rumor that management will axe almost half of these people.

Almost 3,000 employees were laid off from local securities firms including Samsung Securities and Daishin Securities. Hanjin Shipping and Hyundai Merchant Marine each let go 200 to 300 employees. Based on the business plans, 142 companies - about half of the nation’s 300 largest companies - held corporate restructurings this year or barely maintained the same size workforce as in the previous year. Some companies hired, but about 17 percent said they hired only 10 people or less.

According to the Federation of Korean Industries, the nation’s 100 largest businesses hired an average of 42,900 new employees every year from 2009 through 2013.

This means local chaebol faced an abrupt shift in their employment policies toward slimming down. And market analysts think such a trend won’t easily be reversed.

“Korean salaried workers will face more serious crises next year as the local economy is likely to stay sluggish in the new year,” said Cho Joon-mo, an economics professor at Sungkyunkwan University. “The government should put its foremost economic policy priority on job creation.”

By industry, auto, auto parts and retail are the few industries that didn’t have to lay off much this year.

Confectionary and food companies Orion, Ottogi and Namyang Dairy Products, which are usually stable companies, each eliminated as much as 640 positions. Construction, securities and insurance businesses, which suffered a sluggish year, had lots of layoffs.

LG Display has a reputation for hiring, not firing. The display maker hired an accumulated 14,700 workers in the past five years. However, nearly 1,000 workers left the company in the last nine months.

“As the company recently decided to focus on large displays [which don’t demand as much manpower], the numbers of workers keeps dropping with no demand for new workers,” said an official at the display maker.

Samsung Electronics decided on a large-scale reshuffle after its operating profit halved from that of last year.

Recent layoffs are different from those during the Asian Financial Crisis of the late 1990s. In the ’90s, the layoff crisis swept almost all conglomerates simultaneously, and were very public. But this time around, companies are quietly laying off their employees in the name of corporate restructuring or reshuffling and expanding outsourcing.

KT, which saw operating losses for three straight quarters since October last year, held a mass early retirement program in April this year laying off some 8,300 employees. CJ Cheil Jedang lost 1,200 employees after spinning off its pharmaceutical affiliate, while SK Networks laid off 370 people also due to business separation.

According to early retirement compensation guidelines set by the Korea Employers Federation, each company has to include corporate debt and profits when calculating the compensation amounts given to each employee.

“Nowadays companies can’t afford to pay big compensations simply because they are laying off employees due to sluggish corporate performance,” said a public relations officer at the federation.

Executive-level employees, the stars of the Korean chaebol, are no exception from the corporate slimming. GS Caltex, a company famous for its harmonious corporate culture, dismissed 15 percent of its executives this year through a May business reshuffles and recent executive appointments.

As more executives are pushed to retire, some are taking jobs at small and midsize companies.