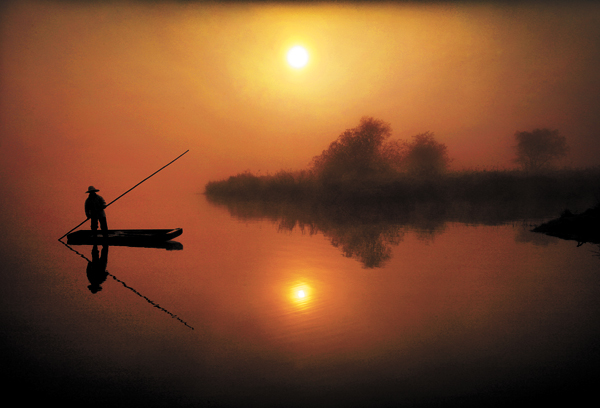 A man fishes with a long boat hook at Upo swamp, the biggest inland wetland in the country and a popular tourist spot.

A wet fog lingers over Upo Wetland at night. Even the dazzling stars are hidden by the milky white rising mist. In the darkness, a small boat in one corner of the swamp starts to move, piercing through the haze. 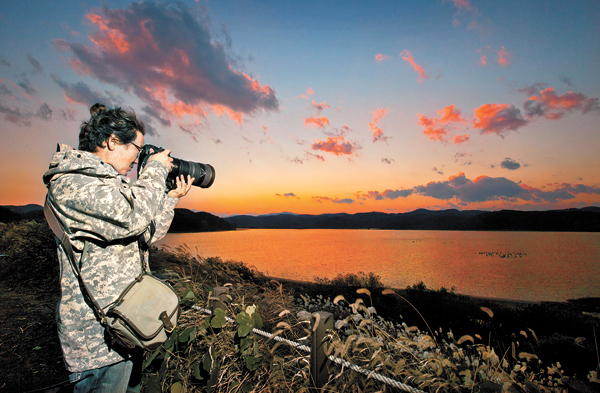 Jung Bong-chae, the photographer, takes a photo during sunset.

The vessel’s driver drops a long boat hook and casts off. There is no one else around and he is difficult to see. The time slips by. It is soon afternoon, and a thick and heavy fog swirls down, twisting through the wetness. 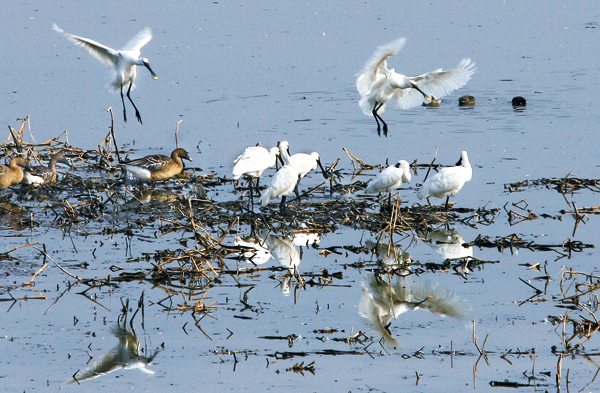 Migratory birds spend time at Upo swamp. These are a group of spoonbills, which are designated as Natural Monument Number 237.

These arcane and dreamy vistas are produced in Upo Wetland each dawn.

But along with the wet fog and the fisherman, another person greets the swamp at daybreak. Photographer Jung Bong-chae has documented the area’s nature and the lives of the fishermen who toil there every day for 15 years without fail.

A picture of around 1,000 white herons that Jung took at midnight.

Jung has devoted his life to taking pictures of the nation’s largest inland wetland, located in Changnyeong, South Gyeongsang, since the start of the millennium. He goes back home when the sky turns dark and the fishermen leave.

The first time Jung began to take an interest in capturing the world around him was when he joined the photography club during college. An electronic engineer, he taught at a school for 13 years after graduating. His enthusiasm developed while he was teaching.

He finally gave up his stable life because he was worried that his passion would eventually fade away and started to focus on life as a photographer. However, Jung struggled with destitution soon after departing from his job.

To make a breakthrough, he left for Hokkaido, Japan, which was inhabited by 400 out of 450 endangered cranes during the time he was there. He took pictures of the beautiful scenery, including the birds, while living in the area for about a year.

But Jung soon began to feel skeptical of his stunning pictures. He started to question whether a photograph has to be beautiful. He eventually decided to focus on expressing a purpose through his photography rather than aesthetics.

Jung’s next destination was Upo Wetland. He left behind his family at the cusp of the 21st century, when the whole world was filled with excitement.

His life photographing the Upo area was not easy. It was difficult for him to escape from his habitual style of capturing gorgeous scenery. Soon, he realized that his work was too objective and started to look for a different perspective as an artist.

Jung gradually figured out how to take a picture in his own style through an experience where he spotted an elk at the swamp and about a thousand white herons around midnight.

The photographer, who has spent about 30 out of the past 40 years searching for a pretty picture, now focuses on taking snapshots that capture a time when an objective moment turns into his story.

Wandering the swamp all day and waiting to click his camera’s shutter has become his daily life.

Jung said his perspective of photography became even clearer when he lectured master’s students at the Academy of Art University.

“Nature is the future” is what Jung realized in Upo Wetland.

“A human becomes a demon when he or she strays from nature,” he said. “A person can find one’s sincere heart when he or she comes closer to nature, and this is my attitude when I take a picture.”

Upo Swamp, surrounded by silver-white grass and gold winter reeds, snuggled against a flaming sunset, is filled with migratory birds during winter.

Some of the fowl that call the wetland home are designated as natural monuments, including spoonbills, swans and storks.

Migratory birds like spectacled teals and snipes also visit to spend the winter. Jung will spend the season with them, waiting for his shutter to click.