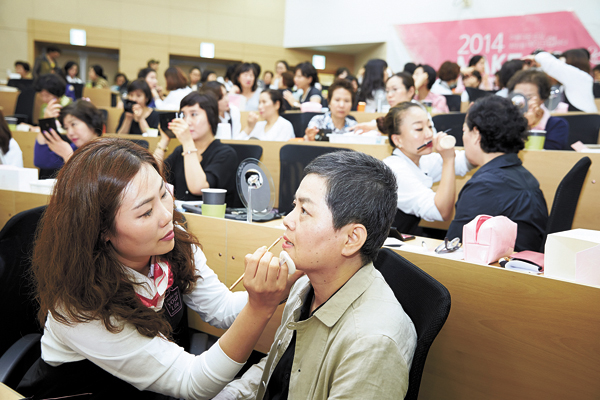 A volunteer makeup specialist does a tutorial for a breast cancer patient at this year’s Makeup Your Life campaign at Seoul National University Hospital in central Seoul. Provided by the company

For a 47-year-old breast cancer patient surnamed Lee, chemotherapy-induced hair loss and changes in appearance were as agonizing as the physical affects of the disease on her body.

“As I underwent the first round of treatment, I began to lose my hair and my skin got darker and was frequently irritated,” said Lee. “That really distressed me as a woman, and I avoided going outside.”

But she was able to get a boost to her self-esteem at an event by Amore Pacific, in which cosmetics specialists share beauty tips and test makeup. The campaign, titled Makeup Your Life, is at the heart of Korea’s largest beauty company’s corporate social responsibility activity. While the campaigns of other cosmetic brands often center on sustainable packaging and green development, Amore Pacific has dedicated substantial resources to Makeup Your Life for the past seven years.

The company holds events for breast cancer patients from 35 hospitals nationwide - for about 30 to 60 from each - every year. So far, 9,270 patients have participated.

Lee participated in this year’s Makeup Your Life at Hallym University Medical Center in southern Seoul. Diagnosed with stage-2 breast cancer, she recently underwent her fifth round of chemotherapy.

“I was so exhausted and devastated both physically and emotionally,” said Lee. “But a hospital welfare worker encouraged me to take part in the event.”

The makeup event at the hospital included a lecture on how to brighten skin and ease flush and irritations. Free cosmetic product sets and written guides were also provided.

“I learned that small tips and habits can greatly improve appearance,” she said. “While battling cancer, I gave up makeup somewhat and dressing up, but the event helped me regain hope and confidence.”

The campaign is in line with the company’s emphasis on inner and outer beauty, Amore Pacific said.

“The Makeup Your Life campaign is aimed at helping cancer patients achieve inner beauty after restoring confidence, while they learn hair and skin care tips,” said Suh Kyung-bae, the chairman of Amore Pacific.

“Also, the essence of the campaign is sharing knowledge and information about beauty, something at which we excel.”

Amore Pacific joined a UN Global Compact in November 2007 to engage in more diverse social and international issues like human rights, the environment and corruption. The company said the beauty campaign is part of its effort to fulfill its responsibility under the compact.

Amore Pacific recently won the Didimdol Award at the Korea Image Awards given by the Corea Image Communication Institute. The institute is a nonprofit organization that promotes Korea’s image abroad. Amore Pacific was rewarded for its efforts to raise Korea’s beauty and brand value throughout the world, the organization said.

Suh stressed that the sincerity of volunteer workers is a main driving force in the success of the campaign.

“Every year, we see a growing number of volunteer workers,” he said. “And they have formed a network to function more effectively.”

Volunteers visit hospitals twice a year, and they see it as a truly rewarding experience.

“I still remember one patient who cried at the end of the event,” said Lim Hyeon-hee, who has been with Makeup Your Life since its inception. “She was crying because she felt sorry for herself. She said she hardly took any time to care for herself. From that time on, I wanted to help more patients appreciate their own beauty.”

Lim believes makeup can be a powerful influence on the mind and attitude.

“Over the past seven years, I have met a number of breast cancer patients,” Lim said. “After the lecture, volunteers apply makeup for the patients. I am always amazed at how different their facial expressions, feelings and even speech can be before and after the makeup. As they gain confidence, their looks brighten and they feel uplifted.”

Lim is particularly empathetic toward younger patients. Two years ago, she met a woman in her 20s.

“Women her age are really interested in how they look and flaunt their young beauty,” she said, “but young cancer patients are not like that and shy away from makeup. That really made me feel sad.”

But at the same time, those women keep her passionate about Makeup Your Life.

Lim asked one of her friends to join in the volunteer work after having a memorable experience, and Song In-joo began to participate in 2009.

She said the campaign immersed her in further exploration of makeup tips tailored for cancer patients.

“I try to show easy makeup tips that can help them look more bright and lively,” Song said.

“For example, instead of a thick foundation, CC cream is good to brighten and correct skin tone in a natural way. Also, I often recommend that patients use cream-type blusher to add freshness.”

Song said it also is important to keep skin moisturized because chemotherapy often saps its vitality.

“As I meet and observe many patients, I learned that fighting cancer is not only about physical health, but mental health,” she said. “People feel uncertain and face frustration and exhaustion. Those negative feelings can undermine their willingness to fight cancer. This is why it is so important to maintain a positive mindset. And Makeup Your Life can help generate positive feelings for the patients.”

Amore said it may further develop the campaign.

“We are working on a more extensive and comprehensive support program for cancer patients,” said Kim Jeong-ho, who works in the Growth Support Division.

The company said the campaign will expand its reach in the region as well. Since 2011, Makeup Your Life has been offered in China, where Amore Pacific has nearly 3,000 stores.

The company currently has business operations in Japan, France, the United States, Hong Kong and Southeast Asian countries, including Malaysia and Thailand.