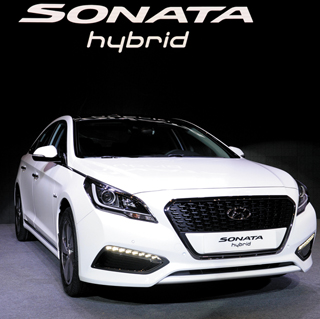 Hyundai Motor introduced a new hybrid sedan that the company claims has the best fuel economy and driving performance in the mid-size hybrid sedan segment.

In an unveiling ceremony Tuesday at the Grand Intercontinental Hotel in Samseong-dong, southern Seoul, the nation’s leading automaker introduced the new Sonata Hybrid to about 250 reporters, photographers and industry insiders. Hyundai invested about 180 billion won ($164.2 million) during 27 months of development.

“We expect this Sonata Hybrid to rev up the country’s environmentally-friendly car market and popularize hybrid cars among consumers,” said Kwak Jin, executive vice president of the company’s domestic sales division. “We are pleased to introduce this model, which has the best fuel efficiency [among mid-size hybrid sedan] and a powerful driving performance.”

The company said its “parallel hard type hybrid system” in-house technology, which was applied to the first-generation Sonanta hybrid in 2011, was again applied to this model. It added that the system, built with a six-speed hybrid automatic transmission, maximizes the Sonata’s efficiency. Its design is much simpler than the combined hybrid system used by most rivals including Toyota and General Motors.

The company added that Sonata’s in-house Nu 2.0 GDI hybrid-only engine has improved the predecessor’s maximum horse power by four percent to 156 and also improved the maximum torque by 5.5 percent to 19.3 kilogram-meters (13 pound-feet).

“Previously, many drivers didn’t want to buy a hybrid vehicle due to weak power and slow acceleration,” said Lee Ki-sang, senior vice president of the eco technology center. “But with our parallel hard type hybrid system, Nu engine and electric motor, which shows off 20.9 kilogram-meter torque, we were able to develop a hybrid car with a sport driving mode, the first among domestic hybrid models.”

The company said that it aims to sell 18,000 units in Korea and 37,000 units globally next year. As part of their promotions, it will offer a 10-year and 200,000 kilometer (124,274 mile) warranty for hybrid-only parts and also will offer the option of replacing the hybrid sedan with a new Hyundai car if a customer isn’t satisfied with the Sonata hybrid within a month of purchase.

The starting price for the car is 28.7 million won while the modern trim is offered for 29.9 million won and the premium model is 32 million won.