Koreans use smartphones for over 3 hours daily

Koreans use smartphones for over 3 hours daily 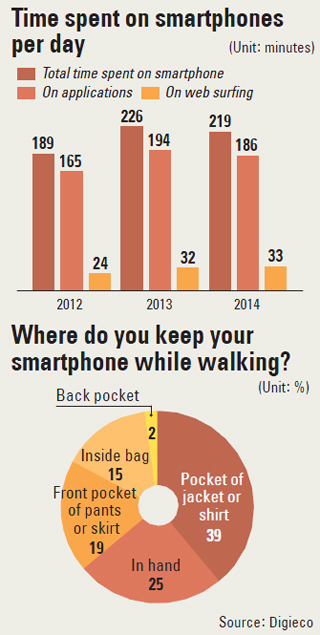 In the country with the highest smartphone penetration rate in the world, people’s daily routines, involving shopping, banking, or surfing the web, are becoming dependent on the technology at a fast pace, according to a report released Tuesday.

Korean smartphone users were on their device for an average of three hours and 39 minutes per day in September, almost twice as long as two years ago, according to a study conducted over the past five years and released Tuesday by Digieco, KT’s economic and business research institute. The time counted excludes voice calls.

Of the three hours and 39 minutes per day, 85 percent was spent on apps while 15 percent was used to browse the Internet.

The comprehensive survey of Koreans’ digital life details usage time, digital content consumption and users’ evolving phone habits such as the growing inclination to keep their smartphone nearby.

Younger people were found to use their phones the most. People in their 20s used their devices for 281 minutes daily and teenagers used them for 239 minutes. But older people still spent a considerable amount of time on their phone. Thirty-somethings spent an average of 220 minutes and 40-somethings spent 189 minutes. People in their 50s used a phone for an average of 151 minutes per day.

The survey noted that KakaoTalk has been one of the causes of increased smartphone use, and mobile games on the app have also kept people glued to their phones.

In a multiple-answer question asking when people use their smart phone most, respondents picked lunch time or breaks as their most preferred time, with 62.4 percent, followed by time spent waiting (60.7 percent), time spent in transit (58.3 percent) and before sleeping (37.1 percent).

The report said that users’ activities differed depending on when they used their phone. Many people browsed mobile shopping malls during lunch and played games in the evening.

But the number of people who carried their phone in their bag decreased to 15 percent from 26 percent.

This increased accessibility to smartphones is due to their perceived importance.

The study warned that heavy exposure to smartphones can have negative effects.

“As people use their extra time on their phone, there will be less time spent on relaxing,” the study said.

A report released by the Ministry of Science, ICT and Future Planning last week also showed the rising significance of phones, with 84.1 percent of households responding that they have a smartphone, while 78.2 percent said they had a PC.