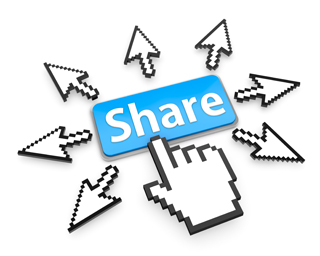 Is the so-called “sharing economy” really all about sharing? If so, why is it making negative headlines all across the world?

As the cost of living keeps going up, transactions involving private cars, homes and commercial goods are the heart of the sharing economy. Such services include Uber, Snapgoods and Airbnb.

However, the sharing economy is increasingly perceived as unregulated, tech-enabled, supply-and-demand capitalism. While it is almost natural that these new mobile business platforms compete with existing businesses, they can be controversial because they often exist in gray areas of the law.

Airbnb, a home-share service, also is outside the boundaries of the law in Korea, as it fails to comply with the Public Health Control Act that makes it illegal to provide lodging in homes that are not registered with local governments.

“Airbnb, which has been operating in Korea for more than a year, is still in the blind spots of safety and hygiene inspections, as well as taxes,” said Rep. Lee Sang-il of the ruling Saenuri Party. “Hosts can freely register their rooms, apartments and houses on the Airbnb website without having to go through any inspections, and the Ministry of Culture, Sports and Tourism struggles with estimating and regulating unregistered lodging services.” 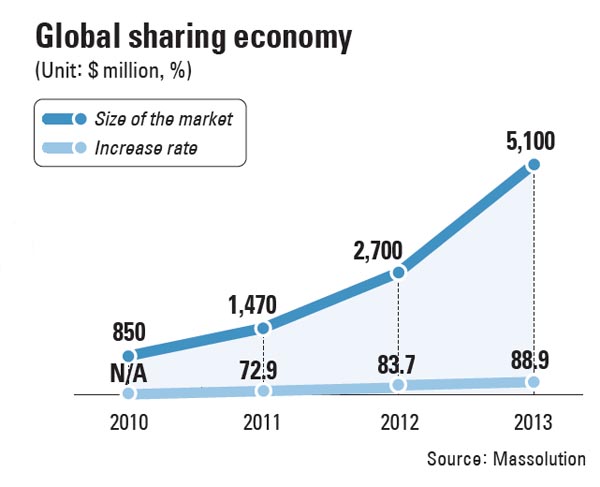 Thus, there are growing consumer complaints about Airbnb properties because of a lack of hygiene, sudden cancellations and slow refunds.

Unlike the “Welcome Home” banner of Airbnb with a video showing hosts having breakfast with visitors at clean apartments on the first page of its website, many users describe the accommodations as tax-free illegal hostels.

A 24-year-old college graduate surnamed Choi said her experience with Airbnb completely disillusioned her about the sharing economy.

“For vacation, I looked for a room in Paris through Airbnb. I thought Airbnb would be a great choice over hotels, because I was hoping to experience the local culture and I was told the host would provide bed and breakfast, as well as some tips on touring the city,” said Choi. “As soon as I got on the plane, I got a message from the Airbnb host that she would not be there and had a key at a nearby supermarket so I could pick it up from there.”

As it was her first trip overseas alone, Choi said she felt deceived and extremely nervous.

“I tried to call Airbnb to ask about this problem, but there was no way other than writing an email, when my plane was about to take off. I wanted a refund, but the host said she could return only 50 percent of the room charge, even if I didn’t stay there, according to her agreement with Airbnb.” 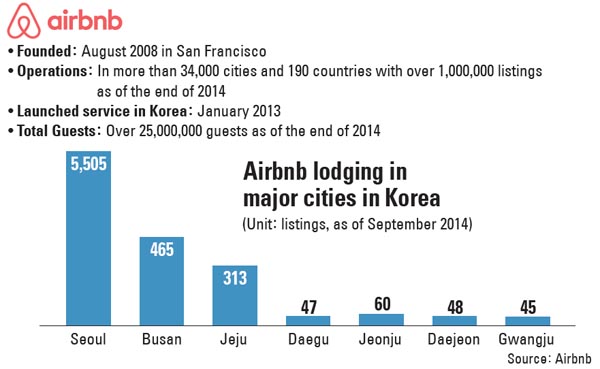 The truth was that the host, who owned several small apartments, was operating a rental business for tourists through Airbnb without providing any services. It was no different from cheap hostels, if not worse, Choi recalled.

“During the stay, I couldn’t get any service from the host as I did not even get to meet her in person. If I went to a cheap hotel in the same price range, I would have at least received some services like cleaning. The price of Airbnb also is not cheap, because you have to pay an extra a fee to Airbnb,” said Choi. “But I couldn’t blame Airbnb, because that’s how they operate and there was no one responsible for the quality of service. What I was left with, at the end of the day, was an automatic notice from Airbnb saying ‘leave us a comment.’”

The service also is opposed by the hotel industry in Korea. “Many hotels feel Airbnb is encroaching on the domestic lodging market,” said a spokesman for the Ministry of Culture, Sports and Tourism. “But because it is essentially a homestay intended to allow tourists to experience Korean family culture, it is difficult to regulate these lodging businesses under current law.”

Airbnb is not the only one that gets around the regulations.

Uber Technology, which connects a person in need of a ride with available private vehicles through a mobile app, is in violation of the Passenger Transport Service Act, which bans rent-a-car businesses and private cars from providing passenger transport for compensation or engaging in brokering activities.

As of May, Uber was battling 13 lawsuits in the United States alone, while its service was recently banned by a court in Spain and the government of Netherlands.

It is also criticized for evading taxes, since transactions typically involve cash between individuals.

Uber, in particular, has been a common target.

“In Seoul, the ride service market is already saturated with 5,000 to 6,000 taxis, which caused the drivers to appeal to the government to limit the number of taxis,” said Lim Ki-sang, chairman of Civil Service of Motoring Service. “Under such circumstances, the new form of ride-sharing through smartphones has appeared. Seoul’s cab drivers say the illegal service will fundamentally destroy the taxi industry.”

Uber has been engaged in a fierce war of nerves with the Seoul City Government over the legitimacy of its business since its launch in August 2013.

The city has repeatedly warned the company that its services violate the law and it will crack down. Yet, the private ride-share company launched its Uber X program, which expands its high-end limousine pickup service to any qualified driver with an acceptable vehicle.

While Uber has said the service could create more jobs and actually help local rent-a-car businesses, it has run into a roadblock with the local government and taxi drivers.

The government of Seoul said drivers using unlicensed vehicles will face fines of 20 million won ($18,200) up to two years in prison.

“Nevertheless, 90 percent of users support our service and say it is safe,” according to a statement from Uber Seoul.

Worldwide opposition to Uber, however, was further fueled by a recent series of incidents involving sexual assault.

An Uber driver in New Delhi was accused of raping a passenger and arrested last week. Another sexual assault was reported by a passenger in London.

Uber and Airbnb reject responsibility for such alleged crimes, saying they are only technology platform providers.

Despite the problems, the sharing economy has some potential positives for consumers, such more choices and ways to reduce costs.

“From the perspective of consumers, except for unexpected situations such as accidents, robbery or fraud, the sharing economy can be a welcome thing,” said Kim Jae-sung, senior consultant at an international management consulting firm.

“It is also likely that if they win the court battles and complement their services, they can gain traction in markets very quickly. However, those businesses that support the sharing economy will have to gear much of their effort toward risk management.”