Stepping up in the wake of a disaster

Stepping up in the wake of a disaster 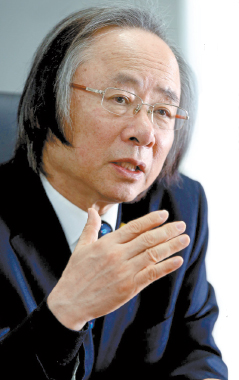 For many Koreans, 2014 will be remembered as the year that hundreds of young lives were lost in cold waters on April 16 in the country’s worst maritime disaster in peacetime history that has traumatized the nation.

If there is one person outside of the affected families who has been involved in the Sewol sinking from the beginning until now, it is Oceans and Fisheries Minister Lee Ju-young, who was faced with the calamity barely a month after taking the job.

For the past eights months, since April 16, Lee has been on the forefront of directing the government’s search efforts as the minister in charge of the mission. He has been praised by both the victims’ families and the public for his sincerity as a senior government official in dealing with the major crisis and caring for the families who lost their loved ones. Lee’s tenderness towards the bereaved families and his heartfelt apology to them for failing to prevent the sinking and for the government’s bungled rescue efforts in the initial stage set him apart from other bureaucrats. Many others were criticized for seeming aloof when they were around the families.

To show his sincerity, the 63-year-old minister hasn’t even had a haircut since the sinking, and it has now grown long enough to touch his shoulders.

The hairstyle has become his trademark.

Lee, who refused interviews with the press in the aftermath of the Sewol disaster, finally granted one to the JoongAng Ilbo on Dec. 9. It was the first interview with the former judge since the ferry disaster.

Q. Isn’t it time now to cut your hair?

A. I didn’t cut my hair or shave my beard for the first few weeks because the Sewol sinking was such a major crisis. The responsibility for the sinking ultimately lied with the Oceans Ministry and so I felt very sorry for the bereaved families [because I am the minister]. I began to shave my beard in August because I had to attend an international conference [on maritime affairs] but have kept growing my hair. This is a way of communicating with the families of the nine victims who are yet to be found. I made a promise to them that I will find every last victim that is still missing. My hair is a sign of my resolve to keep that promise.

You are now nicknamed ‘Paengmok Harbor’s keeper’ because you spent many days and nights with the families there, waiting for the return of the bodies from the wreck.

I stayed in Jindo to take command of the search and rescue. The first time I got out of Jindo was on Aug. 20. Until then, I slept on a cot at the Jindo County Office. [During the day], I briefed the families on the progress of search efforts and presided over meetings on the search operation, the preservation of remains and ensuring the safety of divers.

In the first few days, you were right at the center of the outrage from the families. How did you react to that?

It was usually foul language directed at me. Some remarks were emotionally fraught terms like “You should die drowning in the waters.” But I think it was a natural response on the part of the families to a tragedy [like the Sewol]. Anyone would lose their composure and become highly emotional after having faced such an indescribable calamity that defies our sensibilities.

I was determined that I would not try to avoid being confronted by the families. During one meeting, my junior ministry official told me to leave the meeting because words had reached us that grieving relatives were on their way. I told him I would never do that. I was the man in charge and nothing would be resolved unless I remained in control. If I had left the site, the families would have demanded that I come back, causing another conflict. I told my subordinates to try to listen to their grievances.

When did the bereaved relatives open up to you?

On April 24, we were debating whether to use a diving bell in the search and rescue efforts. Some relatives were opposed to the method thinking it would be of no use, while other family members wanted to try everything possible. Starting at 5 p.m. that day, we had a discussion that lasted past 10 a.m. the next day and finally decided to experiment with the diving bell. During the meeting, the parents began telling me stories of their children. Many told me how good their sons and daughters were and how hard they studied and asked me about my children also. It was during the meeting that they first called me “Minister Lee” in a respectful tone. I think it was right at that moment they realized I was not a public official who would try to evade his responsibility, and we began to build a basis of trusting each other.

The issue of the diving bell sparked a major controversy that the Coast Guard tried to stop its operator from testing the equipment in rescue efforts because of its special relationship with a private dive search firm called Undine Marines Industries.

The bell-shaped metal structure is equipped with an airtight chamber where divers can rest, allowing them to stay underwater for more than an hour. In the midst of growing questions as to why the authorities had delayed using the rescue equipment, a diving bell was finally employed in the waters near the sunken Sewol ferry on May 1, three days after it was brought to the scene of the accident. However, the rescuers who went down with it failed to make progress because of strong underwater currents and the diving bell was withdrawn from the site the same day.

The Sewol sinking must have left an emotional toll on you as well. Who did you rely on the most?

I am Catholic and the church helped me. Later, it was the families who gave me a hand. I was called in by the National Assembly to report to lawmakers on the progress of the search operations. Worried that I would only be subjected to partisan wrangling, the families told the lawmakers they could not let me attend a parliamentary meeting. I felt a bond of brotherhood.

Even though you expressed your intention to step down, many in the public want you to retain your job.

The family members who are still waiting for the nine missing victims, want me to continue my job [for symbolic reasons]. But the responsibility for having failed to prevent the Sewol ferry from sinking ultimately lies with the Oceans Ministry. It’s not only the families that have been traumatized and hurt but also the Korean people as a whole. It is in keeping with my duty as a minister to resign from my post to take responsibility, whether it is for political or ethical reasons.

When asked if he will run to become the ruling Saenuri Party’s next floor leader as was widely rumored, he said, “No comment.” Instead Lee took out a small picture from a pocket inside his jacket and held it in his hand. It was a picture of the nine victims still missing.