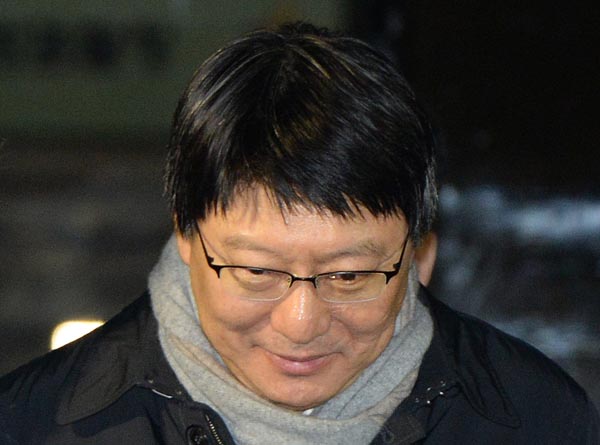 Park Ji-man, the younger brother of President Park Geun-hye, walks out of the Seoul Central Prosecutors’ Office early Tuesday morning after being questioned about the leaked Blue House report on back-room power dealing.[NEWSIS]

Prosecutors have tentatively concluded that the Blue House internal report about the behind-the-scene influence wielded by Chung Yoon-hoi, a former top aide to President Park Geung-hye, was leaked through the police.

That conclusion, which will leave many questions unanswered, has been widely predicted by analysts given the presidential office’s strong grip on the prosecution.

It comes after the Seoul Central District Prosecutors’ Office grilled from Dec. 4 through Monday a handful of figures involved in the biggest political scandal of the Park administration, which led to the suicide of one of the men questioned. They range from Chung to the author of the report dated Jan. 6, the official who ordered the report written, people suspected of leaking it and even the president’s younger brother, Park Ji-man.

A Nov. 28 article in the local daily Segye Ilbo, quoting a leaked document from the Blue House, said that Chung led a group of 10 close aides to the president - including three incumbent presidential secretaries - who had regular meetings to discuss state affairs and how their influence should be used.

Park Gwan-cheon, a senior police officer who had been seconded to the Office of the Presidential Secretary for Civil Service Discipline until February, said he authored the report at the order of his then-boss, Cho Eung-cheon, former secretary for civil service discipline.

The series of revelations have converged into a narrative of a backstage power struggle between Chung and the president’s brother. Rumors say each wanted to influence the president and resented the other’s influence.

The Blue House, after its own internal investigation, reported to the prosecution earlier that Cho led his own group of seven government officials to support the president’s brother, drafting and leaking the report accusing Chung of pulling strings behind the scenes.

But Park Ji-man, the president’s younger brother, told prosecutors in over 10 hours of questioning Monday that he had nothing to do with the report and its leaking. He admitted meeting with Segye Ilbo reporters after they told him about the report, which also had negative comments about his wife, Seo Hyang-hee.

The 56-year-old chairman of a Seoul-based electronics materials producer also denied part of what was written in a March article by the Sisa Journal, a weekly magazine. The article alleged that Chung had hired someone to shadow Park in late 2013. The article said Park caught a motorcycle driver who was tailing him and persuaded him to write a sworn statement that Chung paid him to do so. Chung later filed a suit against the magazine’s reporters, calling the report groundless.

Park told prosecutors he does not have such a sworn statement and that he heard about someone sent by Chung to tail him from several sources including Blue House officials and ruling Saenuri Party members.

Questioned about his relationship with Cho, the former presidential secretary, Park said they meet for meals from time to time but are not on close terms. Their acquaintance dates back to 1993, when Cho was a prosecutor tasked with handling Park’s drug abuse case.

Prosecutors plan to summon Chung once again to cross-check what Park told them on Monday.

Meanwhile, prosecutors have tentatively reached the conclusion that two police officers from the intelligence bureau of the Seoul Metropolitan Police Agency - identified by the surnames Han and Choi - photocopied and distributed the confidential report to the media, including the the Segye Ilbo. Senior police officer Park Gwan-cheon took the report from the presidential office after he ended his work there in February but was allegedly not involved in the leaking.

However, the policeman identified as Choi committed suicide on Saturday, leaving a note that suggested the Blue House had earlier coerced officer Han into making a false confession.

Prosecutors now say they obtained “decisive evidence” from Han’s mobile phone and extracted a confession from him.

Under questioning last Wednesday, Choi claimed that he was told by a colleague that a police officer currently seconded to the Civil Affairs Secretary Office had offered a deal to go easy on him legally in exchange for Choi giving a false admission. The Blue House instantly denied the claim.

According to a report Monday from Channel A, a cable news channel, Han has been staying at a hospital due to “extreme stress.”

Prosecutors are considering charging Park, the author of the Blue House internal report, with violating the law on managing presidential documents and request a preliminary arrest warrant for him by the end of this week. Park initially claimed that someone else at the Blue House leaked the report he had drafted but admitted to removing it from the Blue House.

Exactly what role Park played while he was seconded to the presidential office for civil service discipline will be investigated. He was responsible for checking the whereabouts and activities of the president’s brother and frequented his office in Cheongdam-dong, southern Seoul.

Prosecutors had earlier reached the conclusion there was no group led by Chung that met regularly, as claimed in the report. That means they don’t accept the claim in the report that Chung and the three secretaries exercised extensive power in political affairs and over Park’s schedule.