When a young commissioned naval officer started out with her military career last year, she had grand dreams of serving her country and people.

But 18 months after she joined the Navy, her aspirations for a lifelong military career became compromised from continued sexual harassment and abuse by her male peers.

Over the course of less than two years, Navy First Lieutenant Nam, 26, was sexually harassed on four different occasions and, as a result, transferred multiple times - from Sokcho in Gangwon, to Yeongam in South Jeolla, to Pyeongtaek in Gyeonggi.

Her greatest daily concerns do not revolve around training or Pyongyang’s military movements but on enduring a seemingly endless trial process; wondering whether her superiors will be punished; being ostracized by her peers; and, most importantly, her own uncertain future. 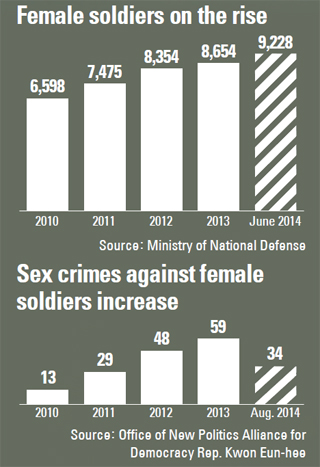 Problems for Nam started at her first post in December 2013, according to documents obtained by Saenuri Party Rep. Sohn In-chun, a member of the parliamentary National Defense Committee.

During her tenure there, she was subjected to verbal sexual abuse from her immediate boss, Lieutenant Commander Han, which included references to male genitalia.

She reported the situation to his superior on the fleet, though no action was taken.

In March, another superior officer in the same fleet, Lieutenant Kim, trespassed into her sleeping quarters on the ship in the middle of training and attempted to kiss her.

After this incident, the military finally began to investigate the situation.

But not much changed.

Nam was forced to continue serving on the same ship and in the same unit as her assailants. Finally, she asked to be transferred.

But at her next post, a first lieutenant surnamed Kim bombarded her with online messages, harassing her and suggesting that they go to “room salons,” or hostess bars.

At her new division in Pyeongtaek, she confessed her encounters to her new immediate superior, Lieutenant Commander Yim, who told her that he would “help her adjust.”

But instead, he reportedly tried to persuade her to join drinking parties or meet with him one-on-one. He would also try to engage in sexualized conversations with her, making comments such as, “In the Netherlands, they allow pornography and brothels.”

Another victim eventually ended up reporting Yim, and Nam, who was already weary of the situation, was drawn into another lengthy trial, using her vacation days to stand as a witness.

“I just wanted to focus on protecting my country. I wanted to become a splendid and confident soldier. But I didn’t know it would be such a difficult and hard thing to do,” she told a female military consultant.

According to a study by the National Human Rights Commission, of 860 female victims, only 38.2 percent has made sexual harassment and abuse reports.

The number of female soldiers in Korea continues to rise, up from 6,598 in 2010 to 9,228 as of June this year, according to the Ministry of National Defense. The ministry estimates that there will be more than 12,000 female soldiers by 2020.

But at the same time, the number of sexual crimes against female soldiers has risen. In 2010, there were 13 reported cases, a marked difference from the 59 last year. This year, there were 34 reported cases as of August, according to the office of Rep. Kwon Eun-hee, a member of the main opposition New Politics Alliance for Democracy (NPAD).

And while a handful of cases saw the assailants expelled or suspended from service, the vast majority of some 160 cases got away with a light slap on the wrist, with punishments ranging from salary cuts, to a mere reprimand to probation.

For female officers like Nam, the numbers are disappointing and represent a stark reality in Korea’s military that is unlikely to change any time soon.

“There are many female soldiers in Army divisions throughout the country that face similar incidents,” said Rep. Sohn, a former noncommissioned officer. “But because they fear backlash, they simply keep their mouths shut.”