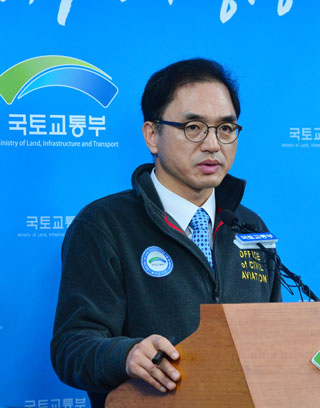 Authorities investigating the case involving the former vice president of Korean Air announced Tuesday that the Ministry of Land, Infrastructure and Transport will report Cho Hyun-ah to the prosecution on charges that she verbally abused members of the cabin crew on an Incheon-bound flight.

Cho made international headlines earlier this month when she delayed a flight at John F. Kennedy International Airport in New York after complaining about the way the macadamia nuts were served in first class and forcing the plane to turn around in order to eject the cabin manager. Korean Air, the country’s top carrier, will also face either a heavy fine or an order to suspend business operations for violating local aviation laws, the Transport Ministry said during a press conference.

“It has been confirmed through testimonies from some of the flight attendants and passengers that Cho used violent language in a loud tone,” said Lee Gwang-hee, the head of the Transport Ministry’s Aviation Safety Division.

Those accounts, Lee added, have led to the ministry to believe that Cho was in violation of the Aviation Safety Act. The complaint against Cho will be filed with prosecutors no later than Tuesday.

The ministry, however, failed to verify whether the 40-year-old used physical violence against flight crew members, said Kwon Yong-bok, an official with the ministry’s Aviation Safety Policy Bureau.

“We will pass over all our investigation data to prosecutors,” said Kwon, adding that the ministry will let prosecutors decide whether to also charge Cho for assault. “Although I drank one or two glasses of wine before boarding the plane, I did not attack a flight attendant,” Lee quoted Cho as saying when she was summoned by investigators for questioning last week.

Her claim goes against what cabin manager Park Chang-jin and a passenger in first class previously stated. Both asserted that Cho used physical violence against the flight crew.

Korean Air will be charged by the ministry for violating the Aviation Safety Act, Kwon said, which may lead to a 144 million won ($131,332) fine or a 21-day suspension of flight services.

Violations include pushing Korean Air members, including Cho and Park, the cabinet manager who was reportedly ordered by Cho to disembark from the plane, to make false testimonies during the probe.

The ministry also determined that the captain failed to adequately supervise flight crew members when Park was forced off the plane, but said it would instead punish the carrier for that, considering Cho, the daughter of Hanjin Group Chairman and Korean Air CEO Cho Yang-ho, allegedly ordered him out. The disciplinary measures taken against Korean Air will be detailed after further negotiation, the ministry said.

The Western District Prosecutors’ Office has already launched an investigation into the case after previously receiving a complaint from a civic group that questioned whether Cho’s orders to the crew violated their human rights or aviation security law.

Cho will be summoned as a suspect at 2 p.m. on Wednesday.

On the flight, she was reported to have initially become upset when a flight attendant in first class served her macadamia nuts in a bag, rather than a dish or a bowl. Cho then demanded the service manual. She is then alleged to have called over the cabin manager and ordered him to disembark. The plane, which was carrying 250 passengers, was forced to return to a departure gate to eject Park. The flight was delayed by 11 minutes.